The weather report on the morning of Sunday, May 14th, was sketchy.  And the upcoming 7-mile section of the trail was supposed to similar to yesterday’s challenging crawl along the rocky coast of Loch Lomond, but even tougher.  Taken together, we decided that discretion was the better part of valor, and that under these conditions, this was the section that we could skip.

The Garrison at Inversnaid

So with the plan in place, and while our fresh, authentic Scottish breakfast was cooking, I went out and took a few photos of the Garrison.

Breakfast was gourmet-level delicious.  After breakfast, Kelly, our host, offered to give us a full tour of the farm from whence our breakfast came.

The animals were a hoot.  The highland cattle were like huge animated puppets, but with cold noses.  The sheep showed interest as well, but the pig was noticeably upset that his pen wasn’t closer to the action.  I’ve never seen a pig climb up on its hind legs before.

After our tour of the Garrison, Kelly gave us a ride back down the hill to the Inversnaid Hotel, where we cooled our heels for just a little while, waiting for a sightseeing cruise of Loch Lomond, which would take us to the western shore of the Loch, slightly to the south at Tarbet.  From there we would take a taxi up to The Drovers Inn at Inverarnan, and from there we would rejoin the WHW just to the north.

Cruise from Inversnaid to Tarbet

The cruise was a nice change, giving us a different vantage point for photos.   There were a couple of young male hikers with us on the boat that we had met the previous day on the trail.  They didn’t seem to mind my offer of a dram to start their day.

The photo below is virtually the entirety of the 130′ x 200′ Inveruglas Isle, which means ‘Isle at the mouth of the Black Stream’.  Look carefully, and you will see the ruins of a small castle or fortification.  This castle, believed to have been built in the 1400’s, was once the home of the chiefs of the Clan MacFarlane.  During the English Civil War of the 1640’s, the MacFarlanes were ardent supporters of Charles I and the royalists.  This made them the enemy of Oliver Cromwell, whose ‘Roundhead’ forces destroyed the castle by fire around 1654.  For something so small, you’ve gotta wonder, ‘Why bother?’.

The photo below is of the Inversnaid Hotel, which we cruised past on our way back south.  Just to the right, you can see the falls seen in an earlier photo.  The Garrison at Inversnaid is just up and over the crest of the hill to the left. 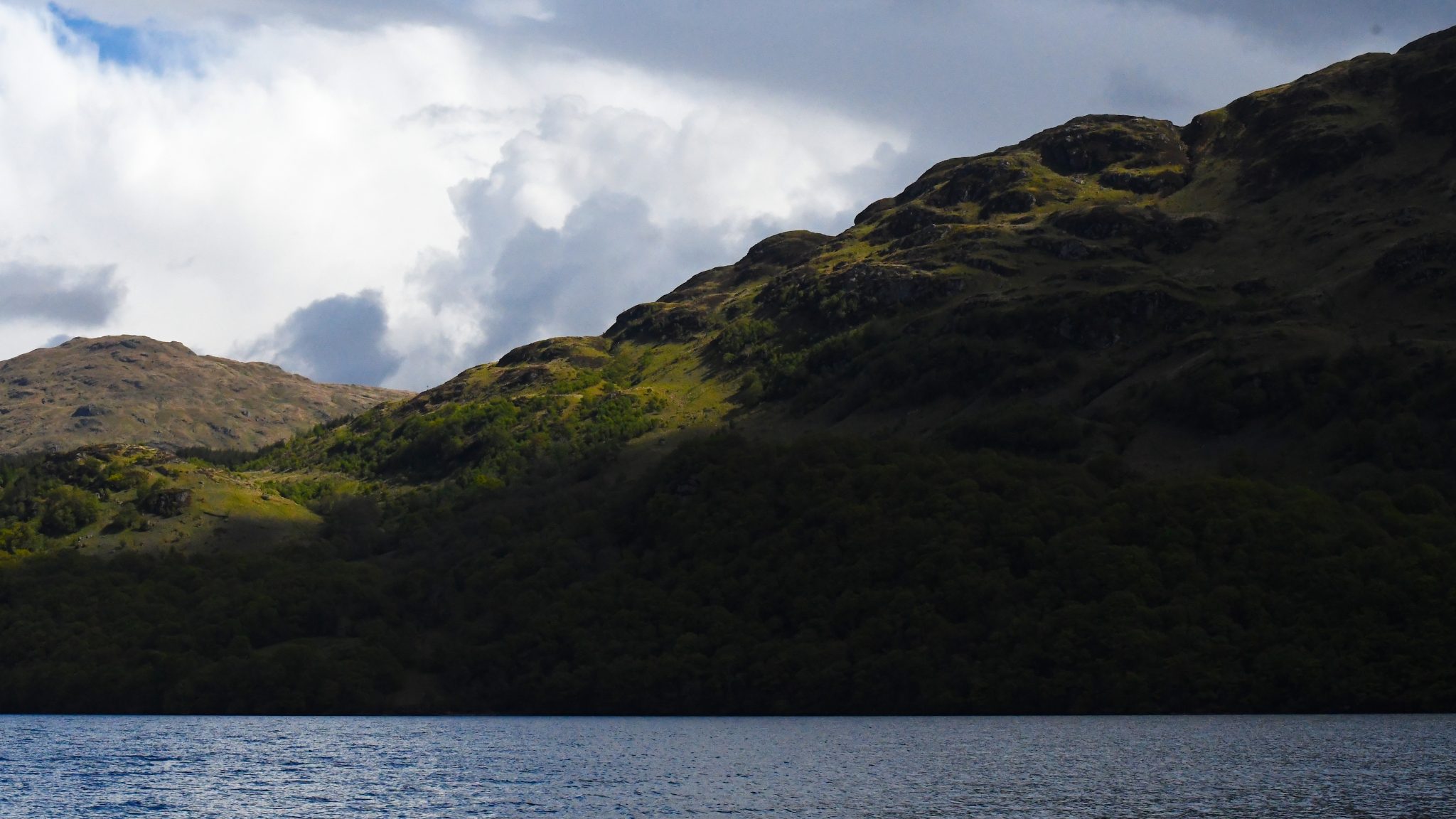 After the cruise boat docked at Tarbet, we went to the Tarbet Hotel to wait for a taxi that would take us 10 miles north to The Drovers Inn at Inverarnan.  Just to the north of Drovers is where we would rejoin the WHW.  The wait for the taxi gave us time to have a drink, and a ‘scone with cream and jam’.

The Drovers Inn is a unique establishment.  It opened in 1705, serving as an inn for Highland drovers who used to drive their cattle down the western side of Loch Lomond to the markets.   It certainly has the Old Scottish atmosphere.  It wouldn’t be a bad place to raise a pint.

From The Drovers Inn (at about 0 feet elevation), we hiked briefly north, and then crossed the River Falloch, which feeds Loch Lomond, turning northeast to follow the river through Falloch Glen.  This was the start of our 6.5 mile hike to the 1-mile side trail to Crianlarich. 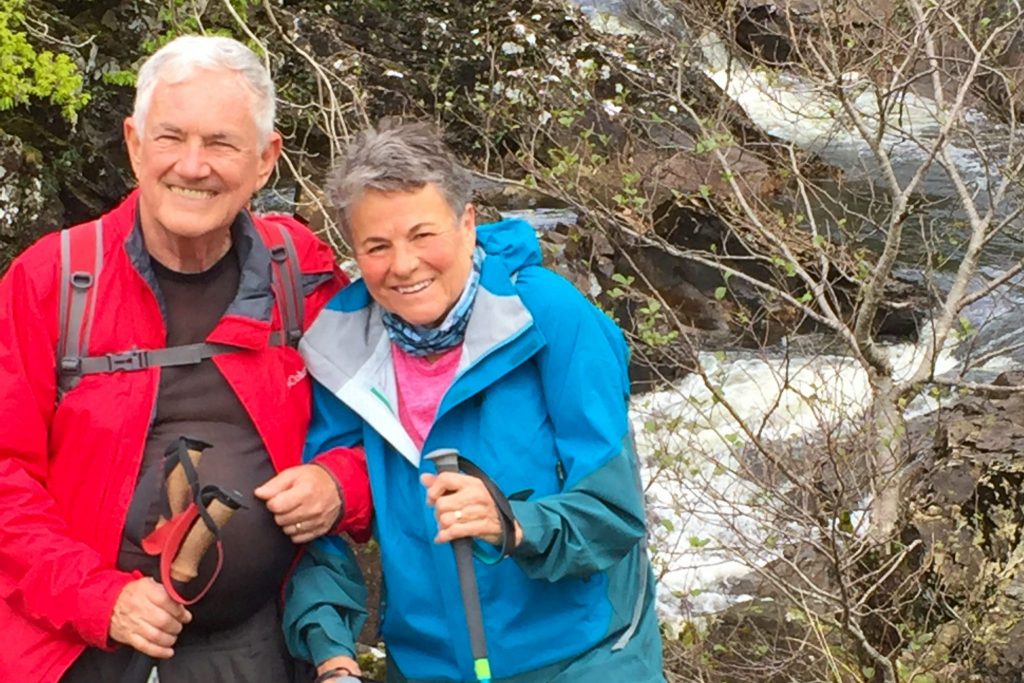 Soon, we stopped for a picnic lunch next to a small brook.  The WHW guidebook said that up ahead we should be on the lookout for feral goats.  Yep, we found them.  They’re kind of spooky looking, but they left us alone.

As we were approaching Derrydaroch, where we would cross to the northwest side of the river, the weather started to change.  It started with wind-blown rain, and then sleet, before relaxing to a steady drizzle.  With the wind at our back, it wasn’t bad at all, but I pitied the people coming the other way on the trail, many of whom were coming down from a weekend in the mountains.  They were hiking with the rain right in their faces.

Along this stretch, with railroad tracks up the hill to our left, and the river down the hill to our right, we came across a herd of ‘coos’.  One cow insisted on hogging trail, but we figured that the locals had right of way.

At about 500 foot elevation, we crossed through a ‘sheep creep’ to the north side of the railroad track, up the hill and over a stile to continue our slow ascent.  From there, we climbed up a broom-covered hillside, with beautiful views to the south and east.

On our approach to Crianlarich, the trail climbs slowly along the northern (uphill) edge of the substantial Keilator Farm.  That’s a lot of stones in that wall!

Finally, from the intersection below (the halfway point on the WHW, at about 800 feet), we turned east and hiked off-trail about a mile (and about 300 feet) downhill into Crianlarich, where we would be staying at Rod and Andrea Salt’s lovely Glenardran House B&B.

After checking in, we showered and then walked down the street to The Rod & Reel pub for dinner and drinks.  In Scotland, you just can’t get enough Shepherd’s Pie.

On Monday, we would have to start the day by climbing the 300 feet back up to the WHW, then another 300 feet, all within our first half-mile.