On Wednesday morning, October 9th, Señor Raúl’s daughter, Rosalia, served us a wonderful Galician breakfast at Casa Raúl.  Then, as we were leaving, her mother gave us some fresh bread to sustain us for our hike (There would be no coffee shops today.).  Our stay at Casa Raúl was one of the highlights of our trip.

The beach that we were approaching was Praia do Rostro.  It is a beautiful beach that’s over a mile long, bounded to the north by the Punta Noreste del Rostro (Point North of the Rostro), and to the south by Punta do Rostro.  That morning, except for the seagulls, we had it all to ourselves.  In fact, we wouldn’t see any other hikers on the Camino dos Faros all day long.  We used this unique opportunity to enjoy the ocean, and to look for shells and sea glass. 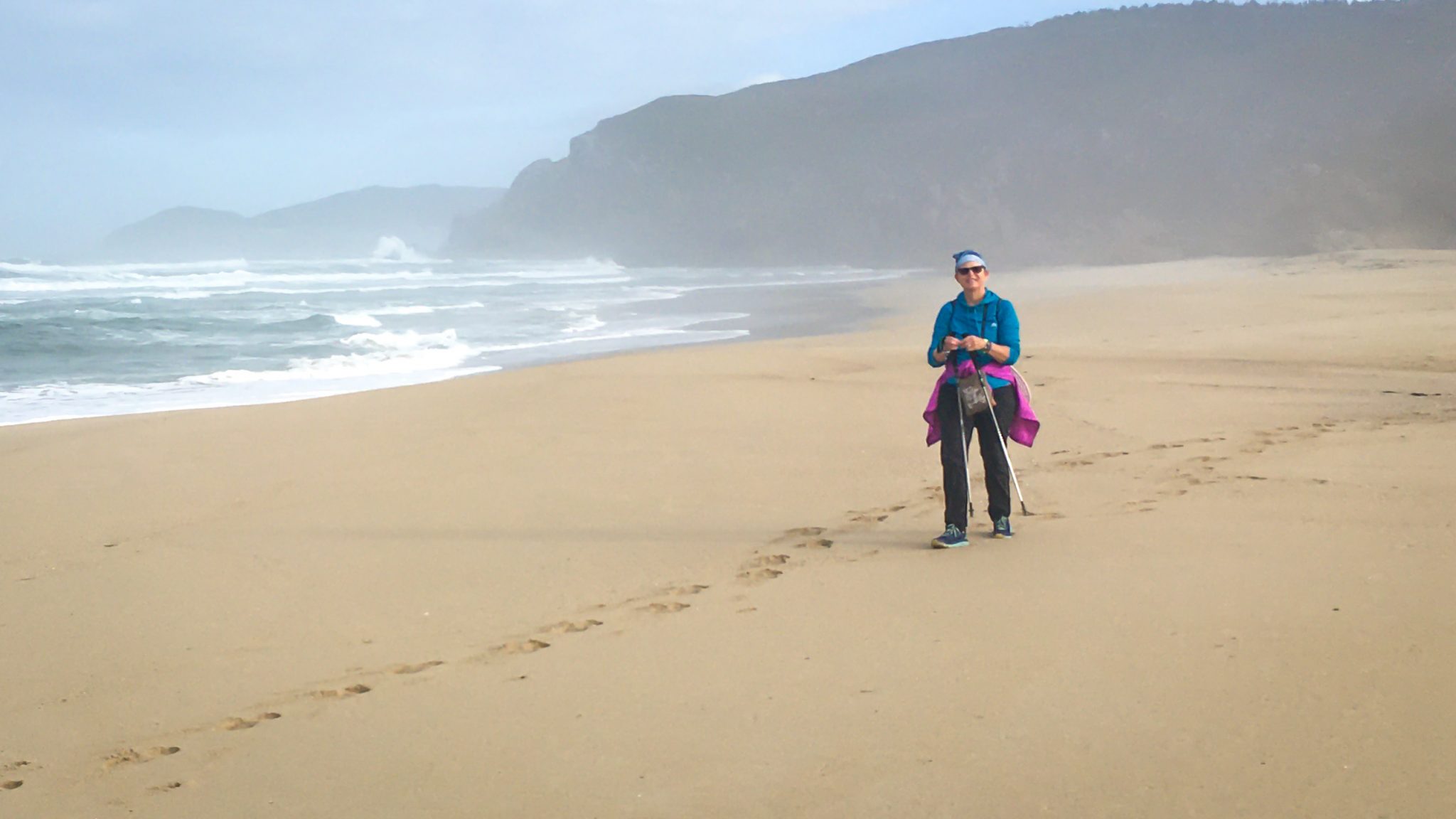 Patty, on Praia do Rostro

As we approached the end of the Praia do Rostro, we had to step through the Rego do Cachiera (creek, seen on the left in the photo below) as it enters the ocean, and then climb out to the Punta do Rostro (the Point of Rostro, at left and top). 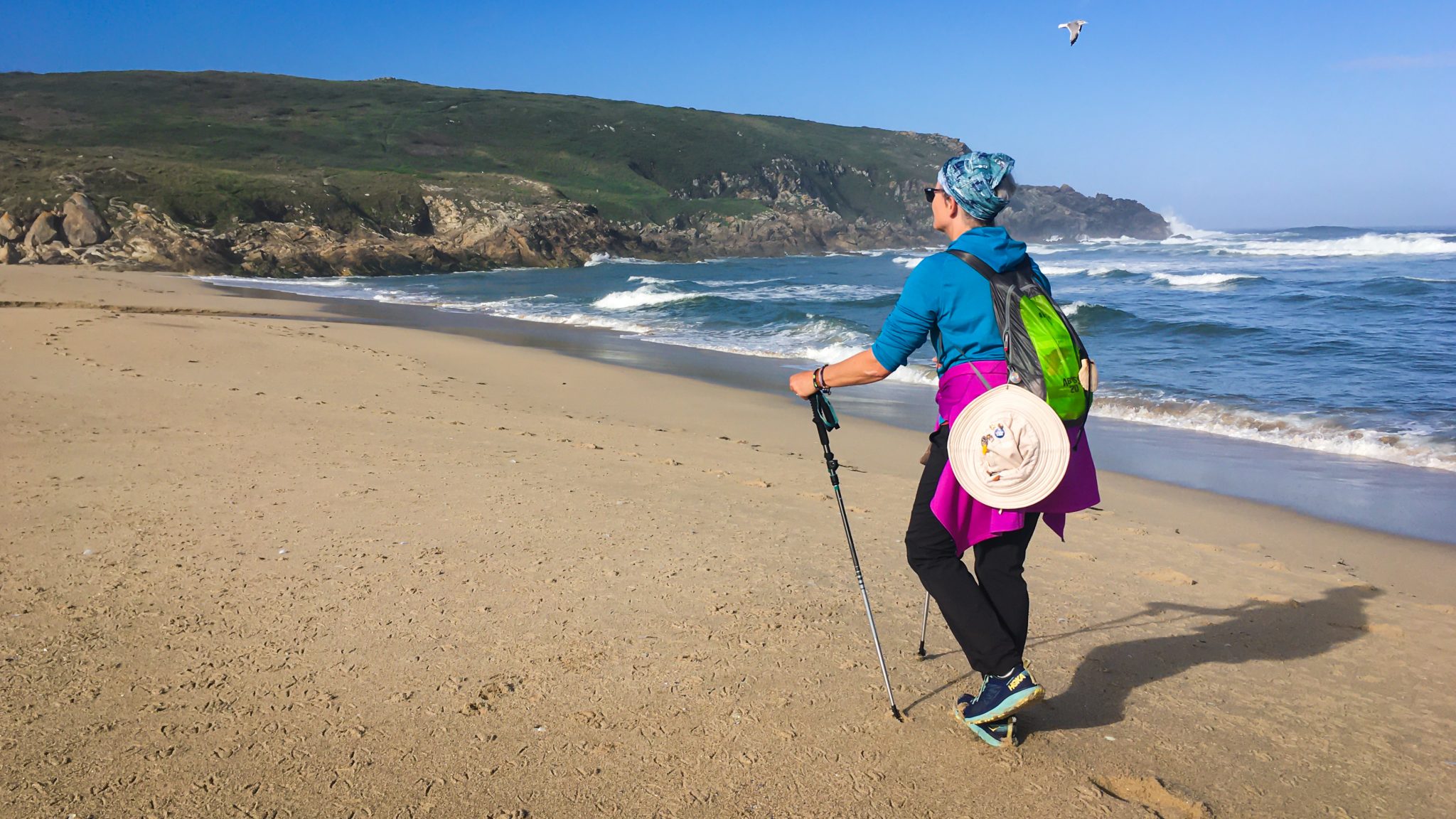 Patty, walking on Praia do Rostro, with Rego do Cacheira coming in on the left, and Punto do Rostro ahead (Annandale, Virginia is 3,460 mi. stage right.). 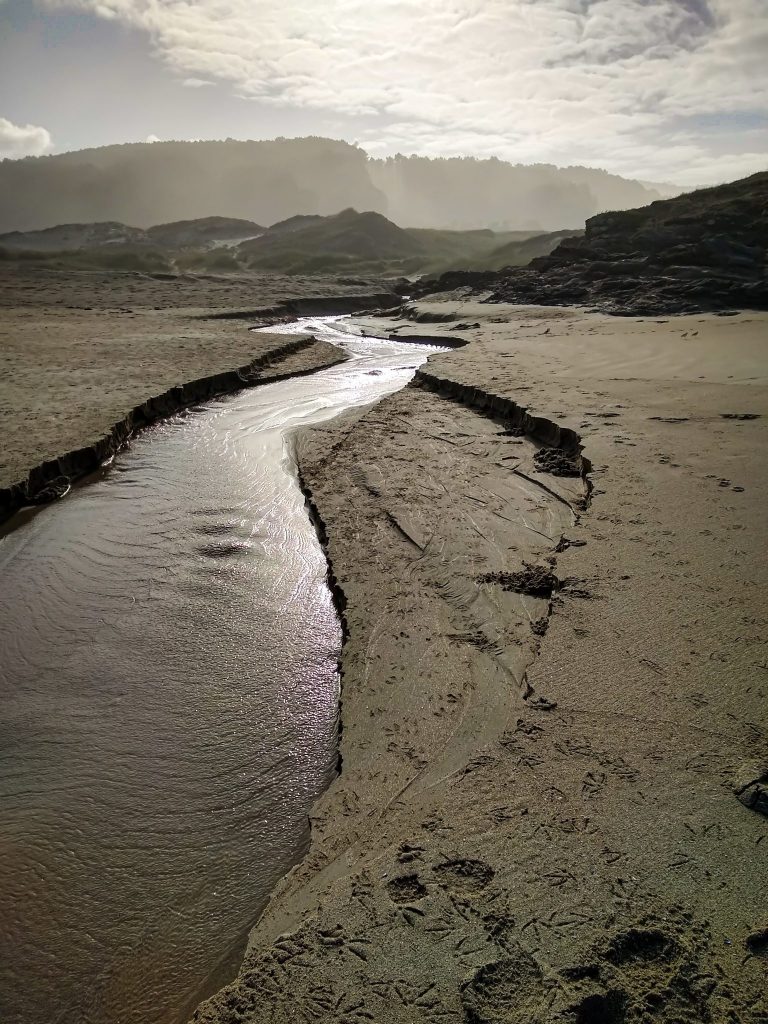 Rego do Cacheira, from the Camino dos Faros, looking up towards Monte de San Xoan, where the Camino de Finisterre runs at the base of its western face. 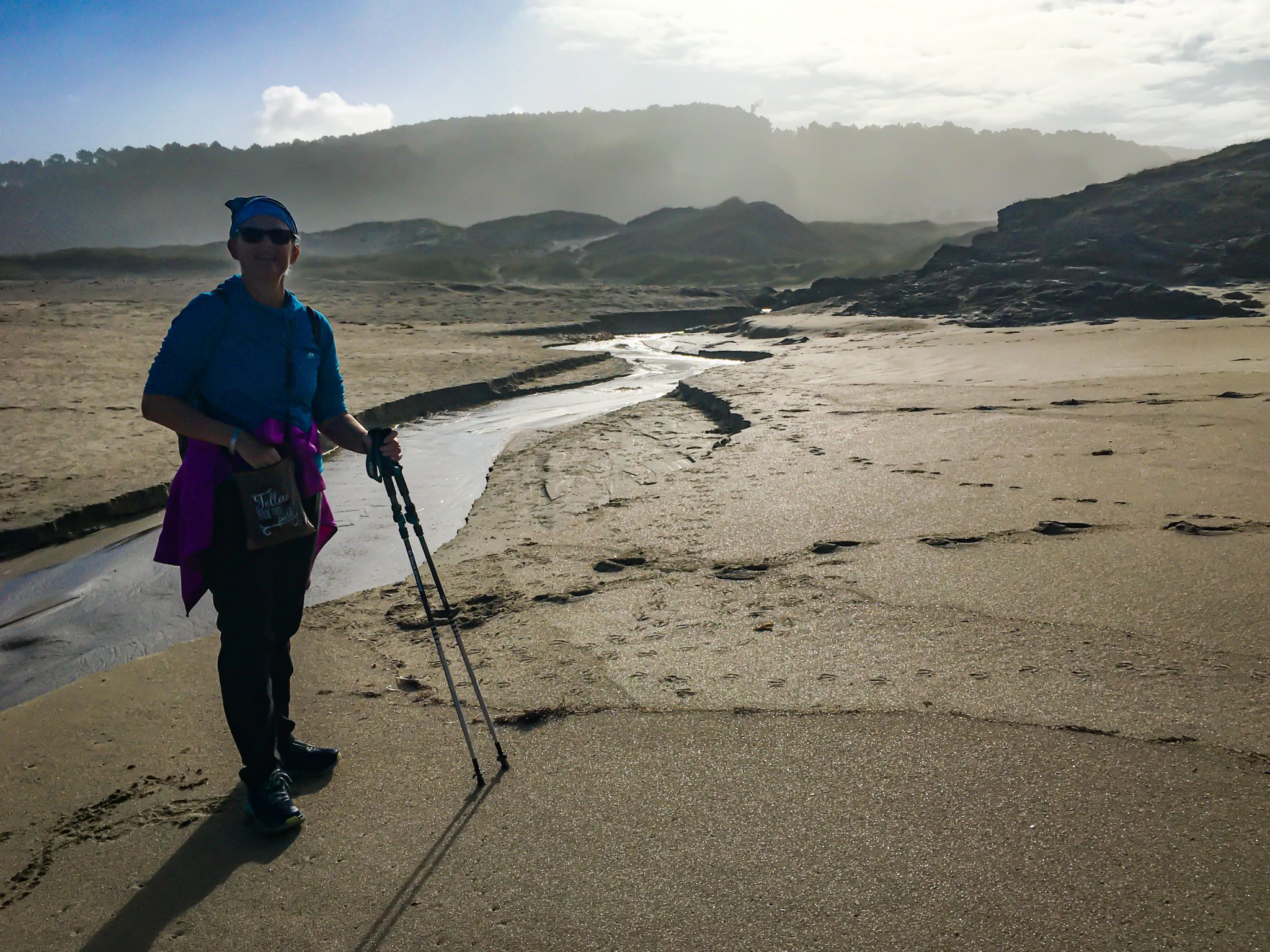 Patty on Praia do Rostro at Rego do Cacheira

The climb up to Punta do Rostro was fairly easy, as most of the time we were hiking along 4-wheel drive paths.

Patty, on the Camino dos Faros, climbing towards Punto do Rostro, with Praia do Rostro and Rego do Cacheira in the background. 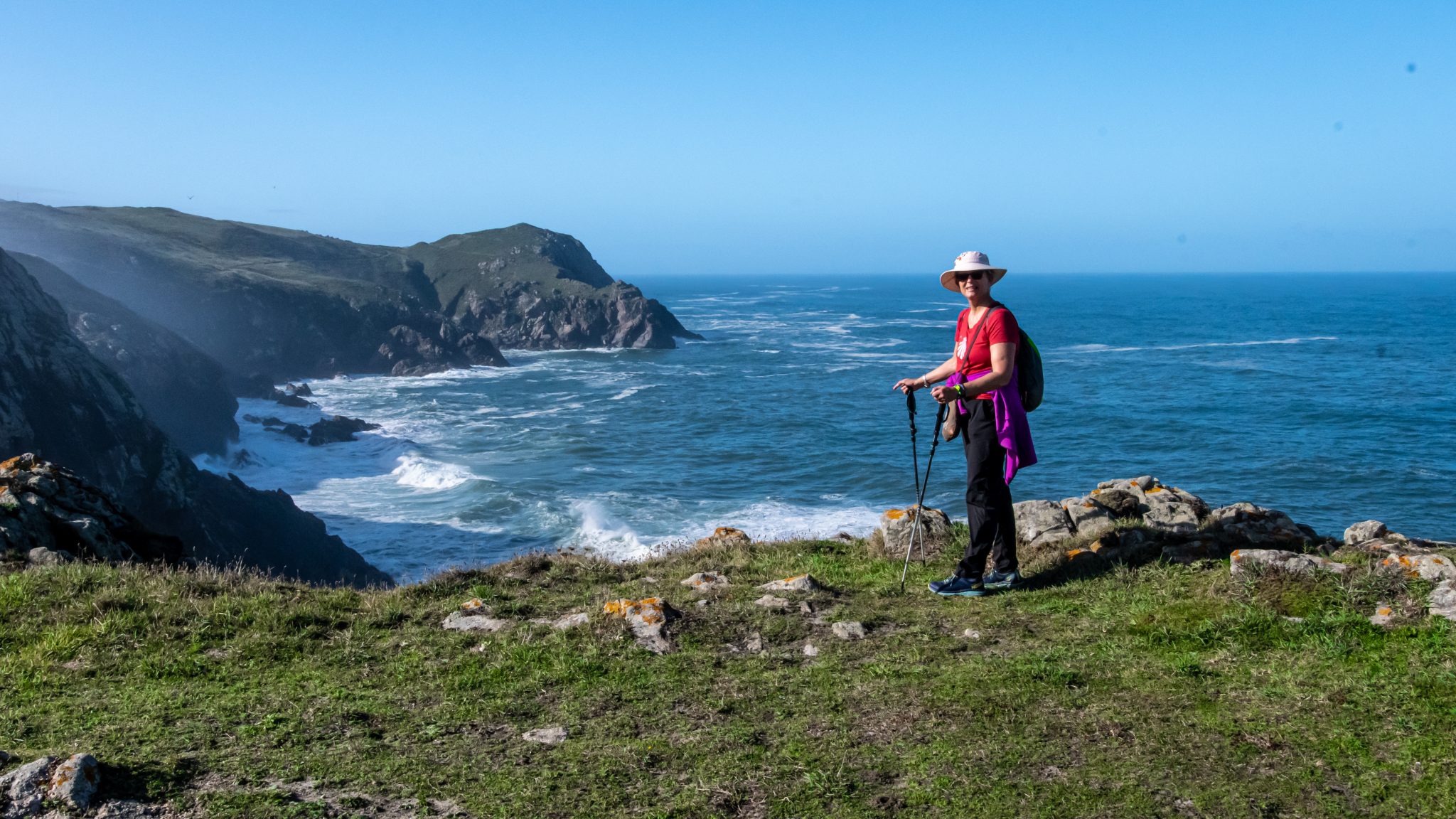 Patty, on the Camino dos Faros, at Punta do Rostro, with Punta do Castelo in the background (view looking southwest). 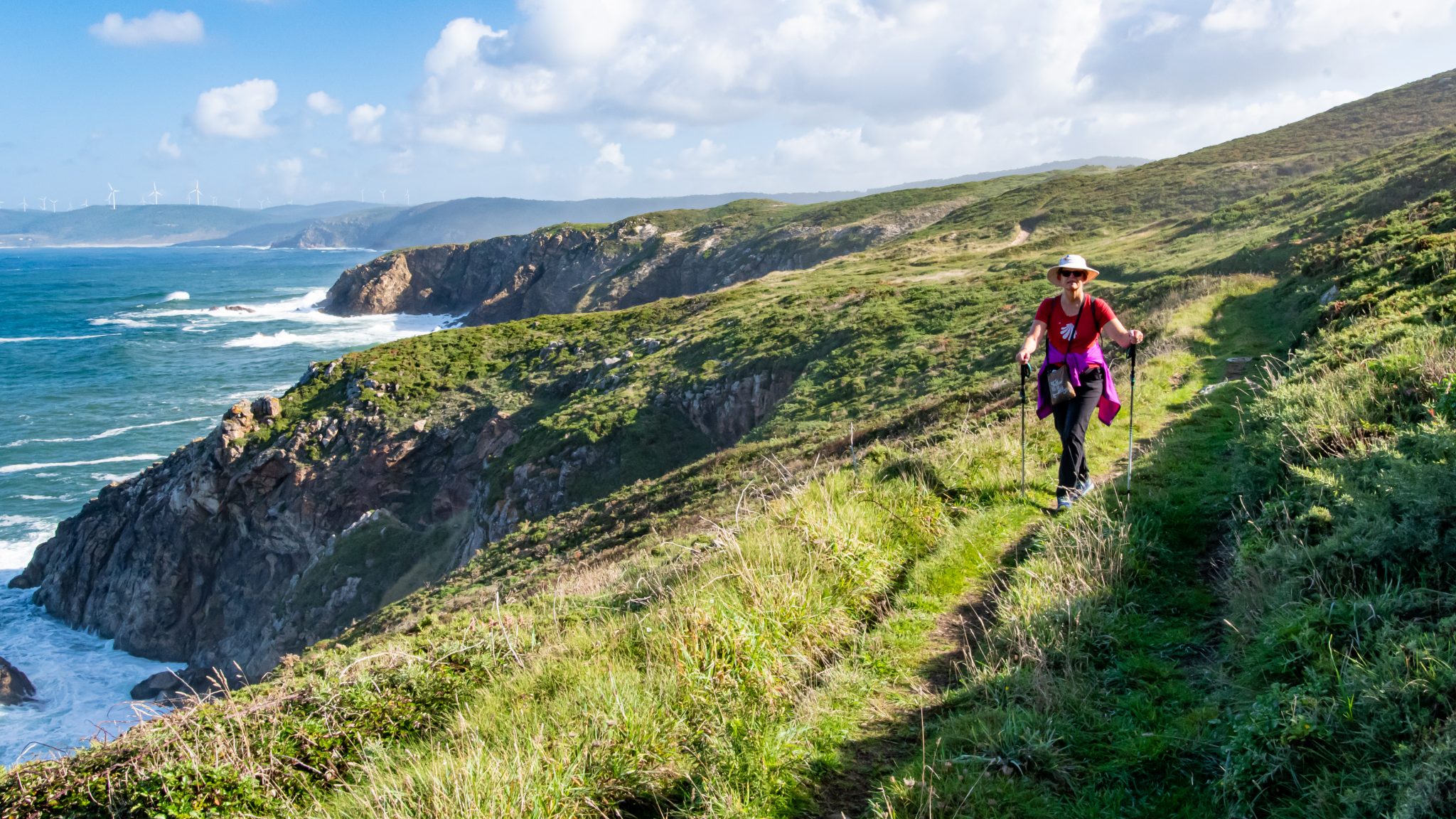 Patty, on the approach to Punta do Castelo. View looking north-northeast, with Punta do Rostro at the back center (about 0.7 miles away), and the wind turbines near Tourinan at the back left (about 8 miles away).

Further down the coast, when we reached Punta do Castelo, there was a footpath on the right that leads up a steep slope to the summit of the point, which rises 260 feet above the water (Based on the name, I assume that there once was some form of a castle here.).  We were already taking in plenty of great sights that morning, and the going had gotten a little tougher, so we chose to press forward along the main path.  At this point, we had no idea of the pickle we were about to put ourselves in.

It started with a short but sporty transit of the gap between Punta do Castelo and O Gavoteiro.  Here the eroding footpath runs right to the edge of the cliff.  And beyond that, the contour of the slope gave us little opportunity to assess the difficulty of the path ahead.  So, we had no idea that for approximately the next mile of footpath, from O Gavoteiro until we passed the western edge of Monte Artigal (on the approach to Praia de Arnela, seen in the distance in the photo below), we would find ourselves hiking a tightrope along a bare 35 to 55 degree dirt slope, 100 to 200 feet above the rocks. 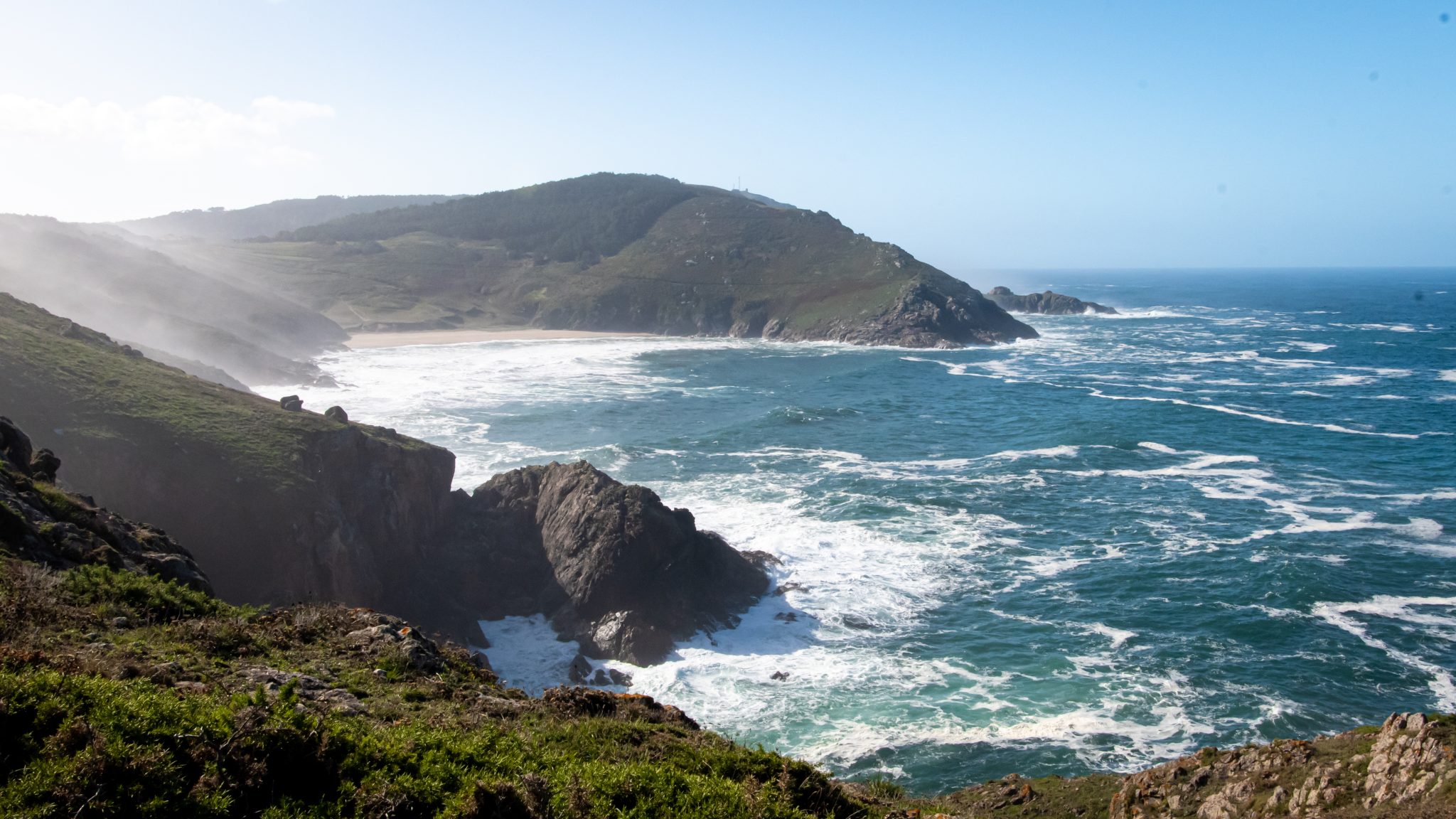 I don’t know what climbing grade should be assigned to this section, but this section of the Camino dos Faros is not appropriate for recreational hikers.  The footing is somewhat loose.  There are few features that provide a safe hold (All substantial vegetation was recently consumed by fire, such that the charred trunks of shubbery turn to dust in your hands.).  And the degree of danger is sustained for most of the way, providing limited opportunity for a safe retreat. 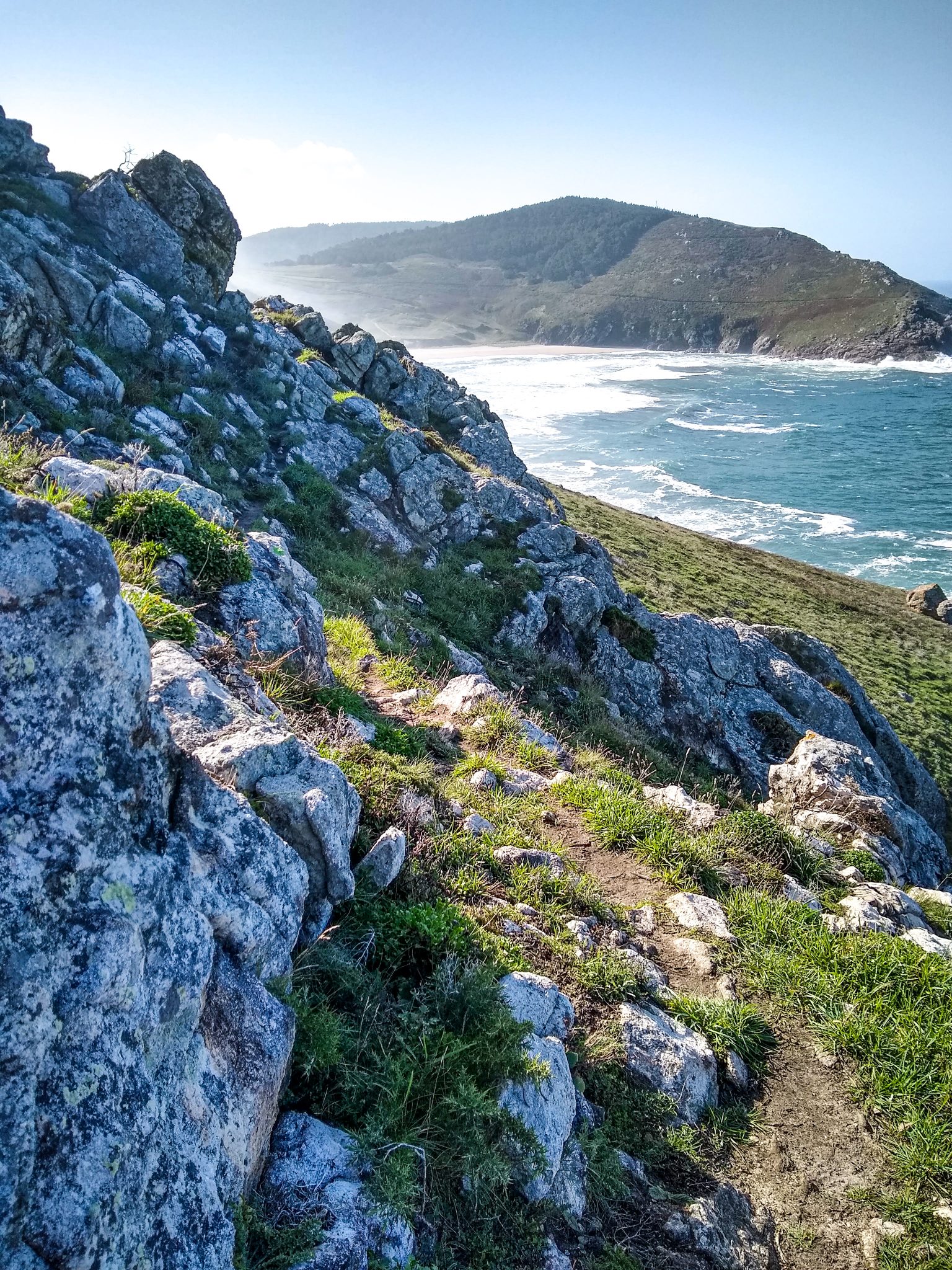 In this photo, the footpath runs from bottom right to skirt the boulder at top left. And the water is much farther down than it looks.

I have climbed, caved, cliff jumped, and scuba dove, but hiking this small section of the Camino dos Faros was the most dangerous thing I’ve ever done in my life. If the weather had not been perfect, I wouldn’t have given us a 50 percent chance of making it off that ledge.  At one point we had to stop, because Patty said she was starting to feel light-headed.  Leaning against the slope, I didn’t even dare to take a photo, because at that point my sticks were key to my survival.  Soon, Patty was up and we were pressing on (That day she showed me that her hiking skills are really phenomenal.).

This section of the Camino dos Faros is only for the most experienced hikers, and without question, it should be remarked to indicate its degree of risk.  Instead (and assuming that right of way is secured), at Punta do Castelo, the trail for recreational hikers should be rerouted up and over Monte do Castelo using what appears to be an existing trail that leads up to the village of Castromiñán. From there, the Camino dos Faros could follow a quiet road for less than 0.5 miles before it would rejoin the existing trail above Praia de Arnela at the hamlet of Denle.

Finally, beyond  Monte Artigal, we started our gradual assent up through A Torre (This name indicates that it was likely once the site of a coastal watch tower.), and to the outskirts of the hamlet of Denle. 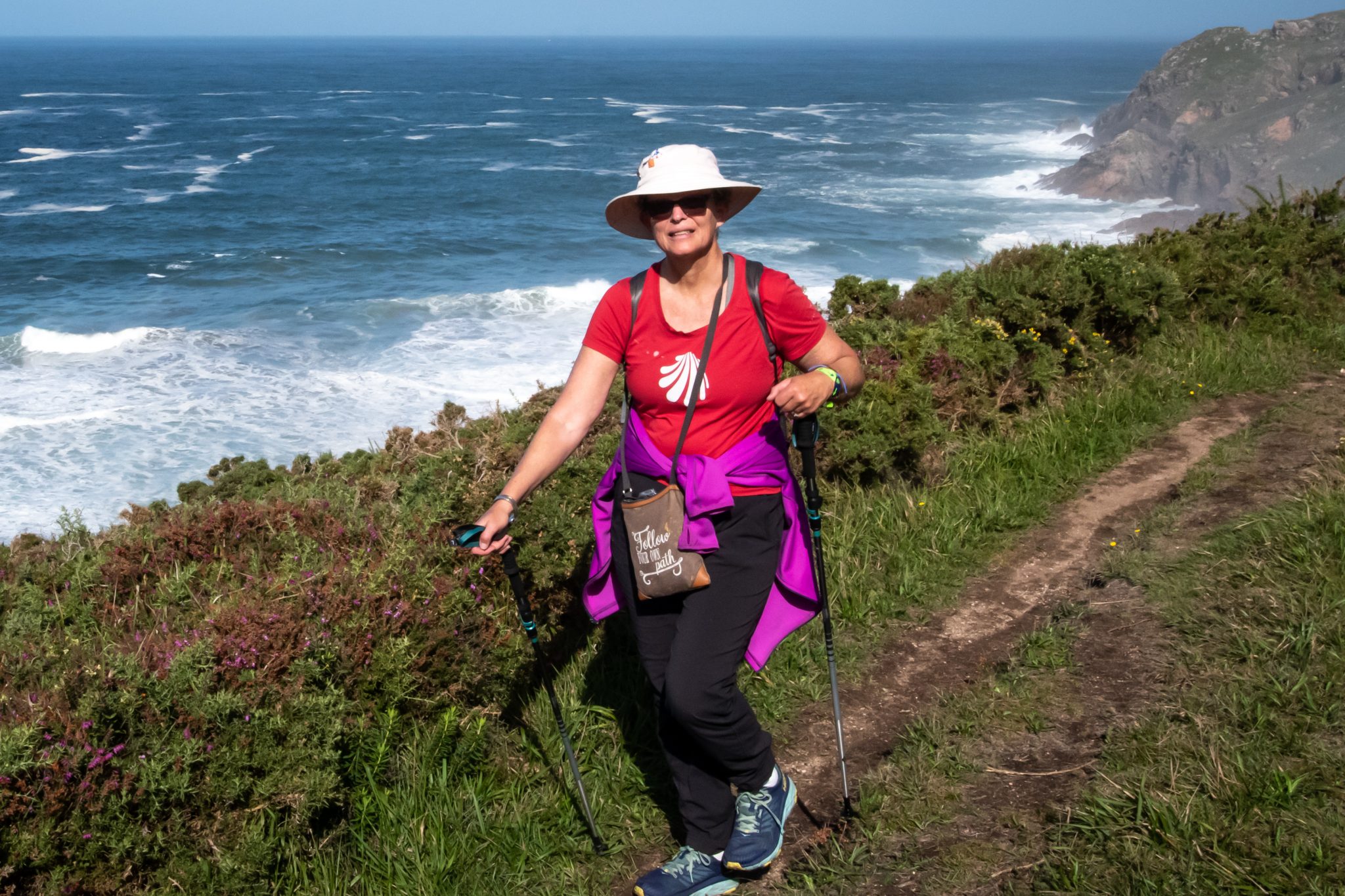 Patty, walking south on the Camino dos Faros, just south of Monte Artigal, on the path leading toward Denle. O Gavoteiro is at top right.

After we reached the road above Praia de Arnela, just outside the hamlet of Denle, we came across an old farmer walking his dog.  He seemed to understand where we had just come from, and he said something in Spanish and gestured with his hands indicating that the path we had just taken had a lot of ups and downs. I quickly entered a phrase into Google Translate on my phone and responded “caminar para cabras” (“path for goats”), to which he responded with a hearty laugh.

South of Praia de Arnela, the Camino dos Faros turns back out towards the next point that juts out into the ocean, Punta Arnela ou Robaleira, and then runs south along the cliffs again past Monte de Arnela and Monte de Lagoa. But at that point, not knowing the condition of that path, we decided that it simply was not worth the risk.

Luckily there were options in that area, so we kept walking on the road past the hamlet of Escola. Then, at Vilar de Duio (Village of Duio), we turned west up a logging road on the eastern face of Monte de Arnela.  We immediately encountered a local resident who seemed to confirm that the road we were climbing would lead up to the summit, and beyond towards Fisterra. Because our topographic map labels the area at the summit (shown below) as “O Castro de Duio“, it appears that this area once served as an ancient hillfort.

From the summit of Monte de Arnela, we took more logging roads down the eastern slope to a paved road that services the cell phone tower at the summit of Veladoiro. At 234 meters (768 feet), Veladoiro, shown in the photo above, is probably the highest point on the Camino dos Faros.

On the way down the paved road, I spotted what appeared to be a more direct path toward the village of Ermedesuxo de Arriba., which was on our way to what I hoped would be a fine lunch at Restaurante O’Fragon (This restaurant was reported as being one of the finest in Fisterra).

And so we broke away from the paved road and started down what appeared to be a dirt farm road.  And that is exactly what it was.  It was a road that led to a farm, and beyond that farm the road we were following disappeared into the underbrush.  We had already had our “Deliverance” moment a couple of days earlier on our approach to As Garzas, so instead of continuing on the disappearing road, we found a path across the farm (where we passed through two gates that raised the interest of a bevy of farm animals), and back to the paved road that we had previously been following (Hopefully no one objected to our shortcut.).

Further down the hill, we stopped at the church of San Vincenzo in the town of Duio and took some photos. 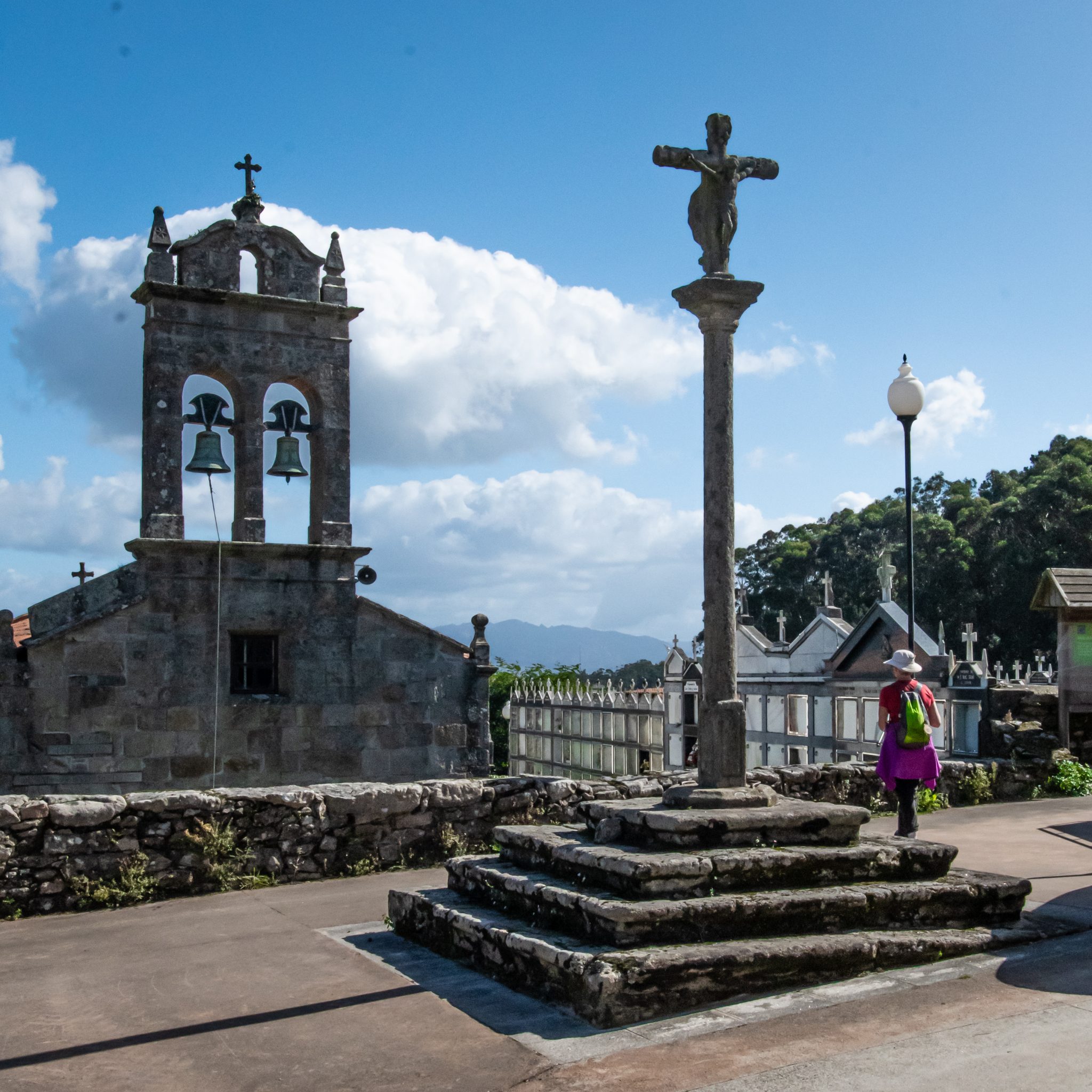 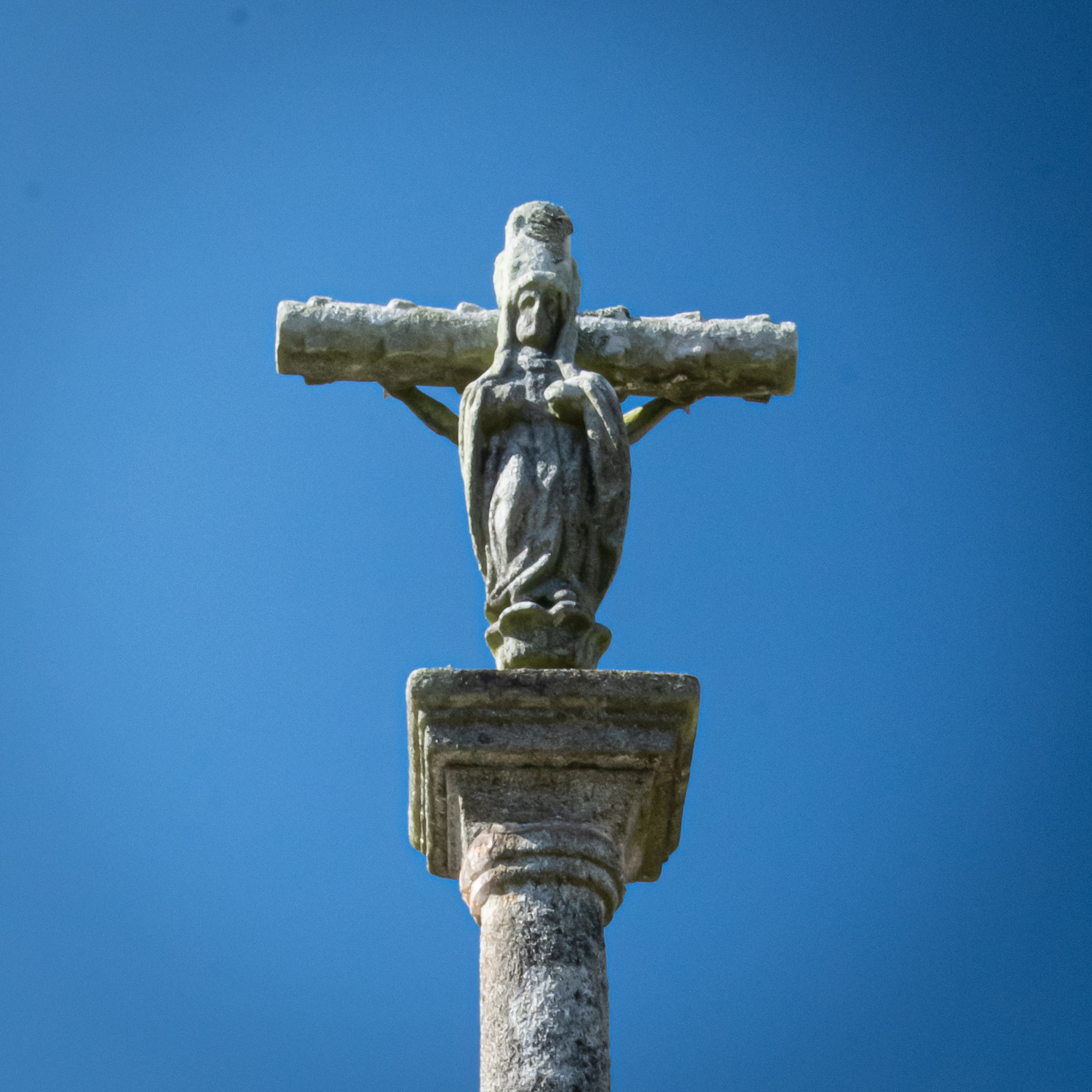 The crucifix at San Vincenzo

From the town of Duio, we walked the country roads through Ermedesuxo de Arriba to San Martiño De Arriba, where we enjoyed a delicious lunch at Restaurante O’Fragon.  This restaurant certainly has the finest view in Fisterra.  And for part of the time, we were its only customers. 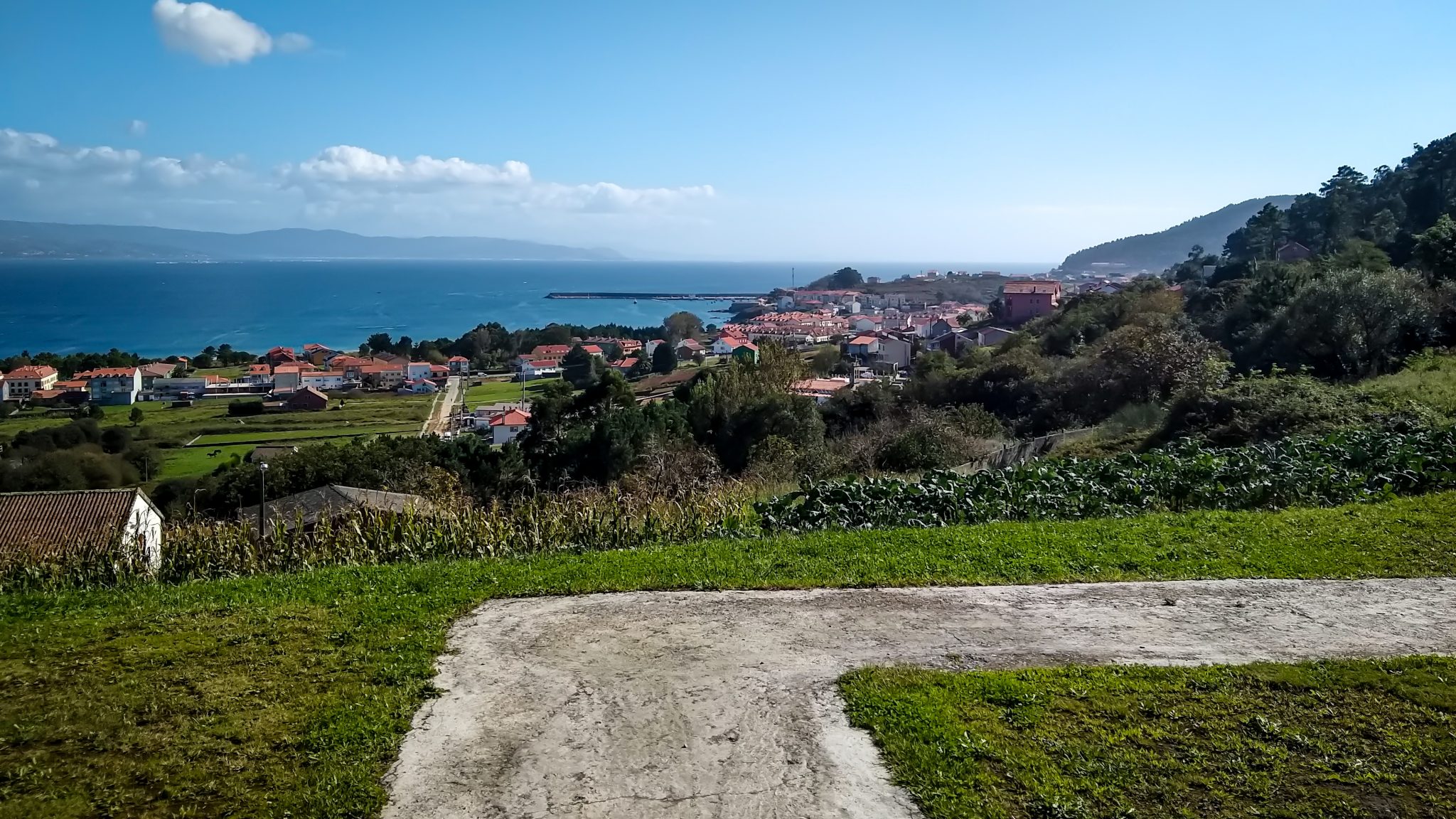 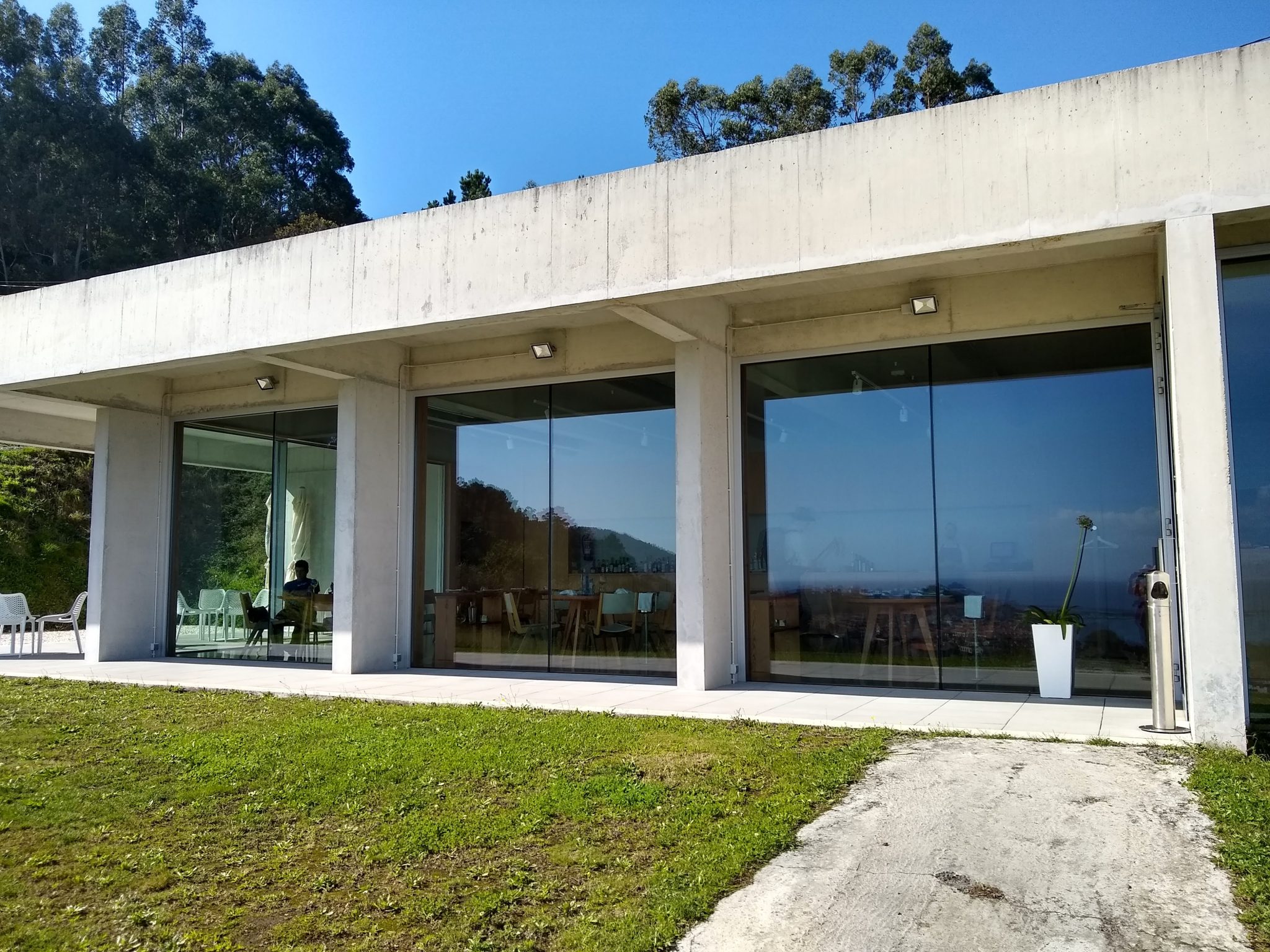 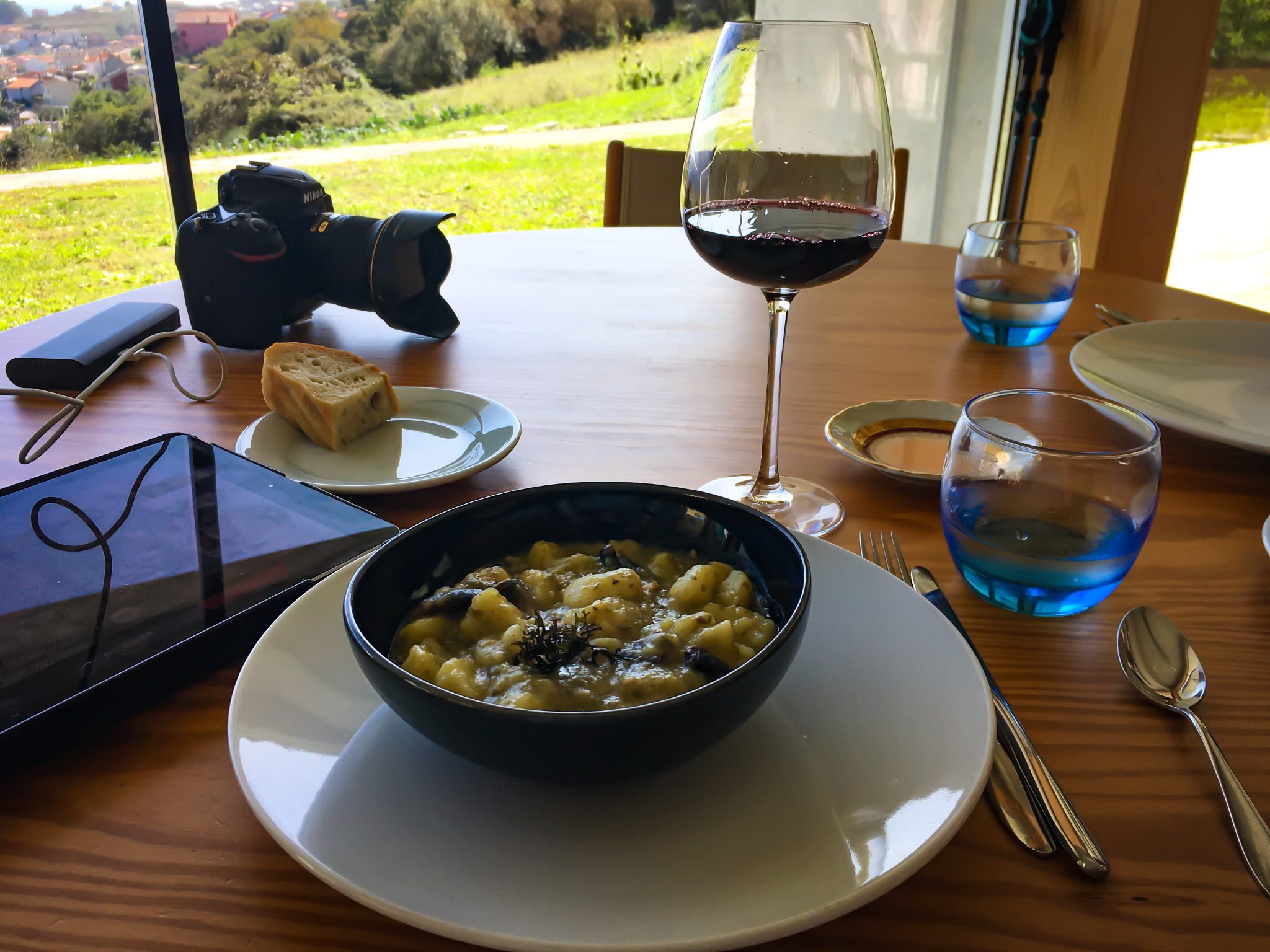 The Barnacle Stew and a Vino Tinto at O’Fragon

Our lunch was excellent.  As this was going to be our last night on the coast, I went for the Barnacle Stew, which is a Galician specialty.  Although the barnacles were much smaller than the plate-sized ones we’ve seen in photos elsewhere around Galicia (of which they are obviously very proud), I found them to be very tasty.

We left O’Fragon at about 4:00 pm, walking another 1.3 miles to Hotel Rustica Spa Finisterrae, where we would stay the night.

After resting and showering at our hotel, we decided to walk down the hill to Fisterra, do a little shopping, and then take a taxi to Finisterre to see the sunset.  I would have liked to have hiked from our hotel up to the ruins of Ermida de San Guillerme (Hermitage of Saint Guillerme) at the top of Monte de San Guillermo, and then from there hike to Finisterre, but by that point we were willing to change from hikers to tourists.  We’ll have to see the Hermitage another time.  Other sites near the top include the Pedras Santas and Pedra Cagona, rock formations which I believe at one time were the sites of ancient altars to a “sun god”.  Down in Fisterra, the Castelo de San Carlos Museum would also be worth a visit.

When we got down to Fisterra, Patty went off searching for souvenirs for the Camino dos Faros, while I went searching for photos.  Here are a few that I found. 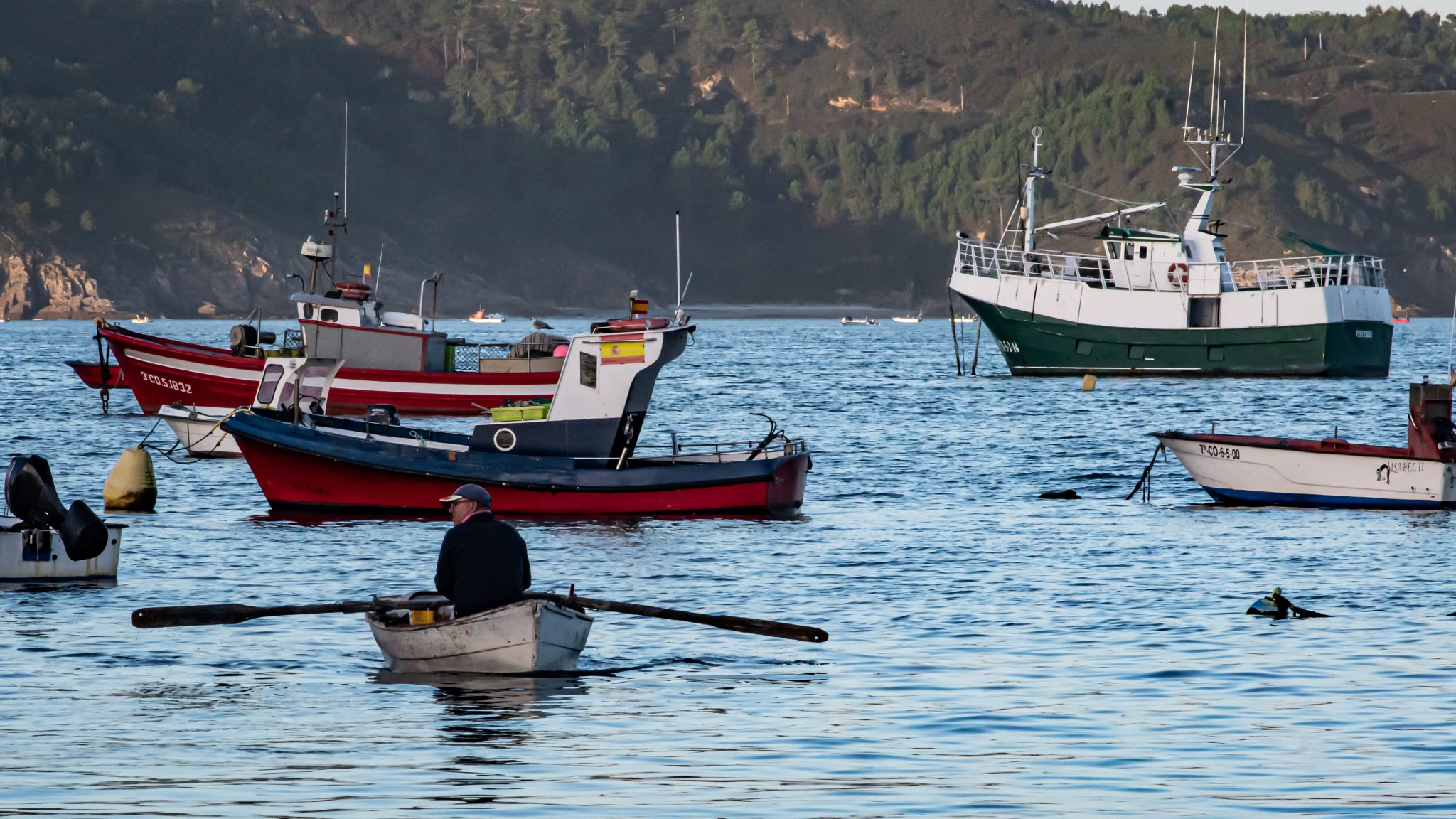 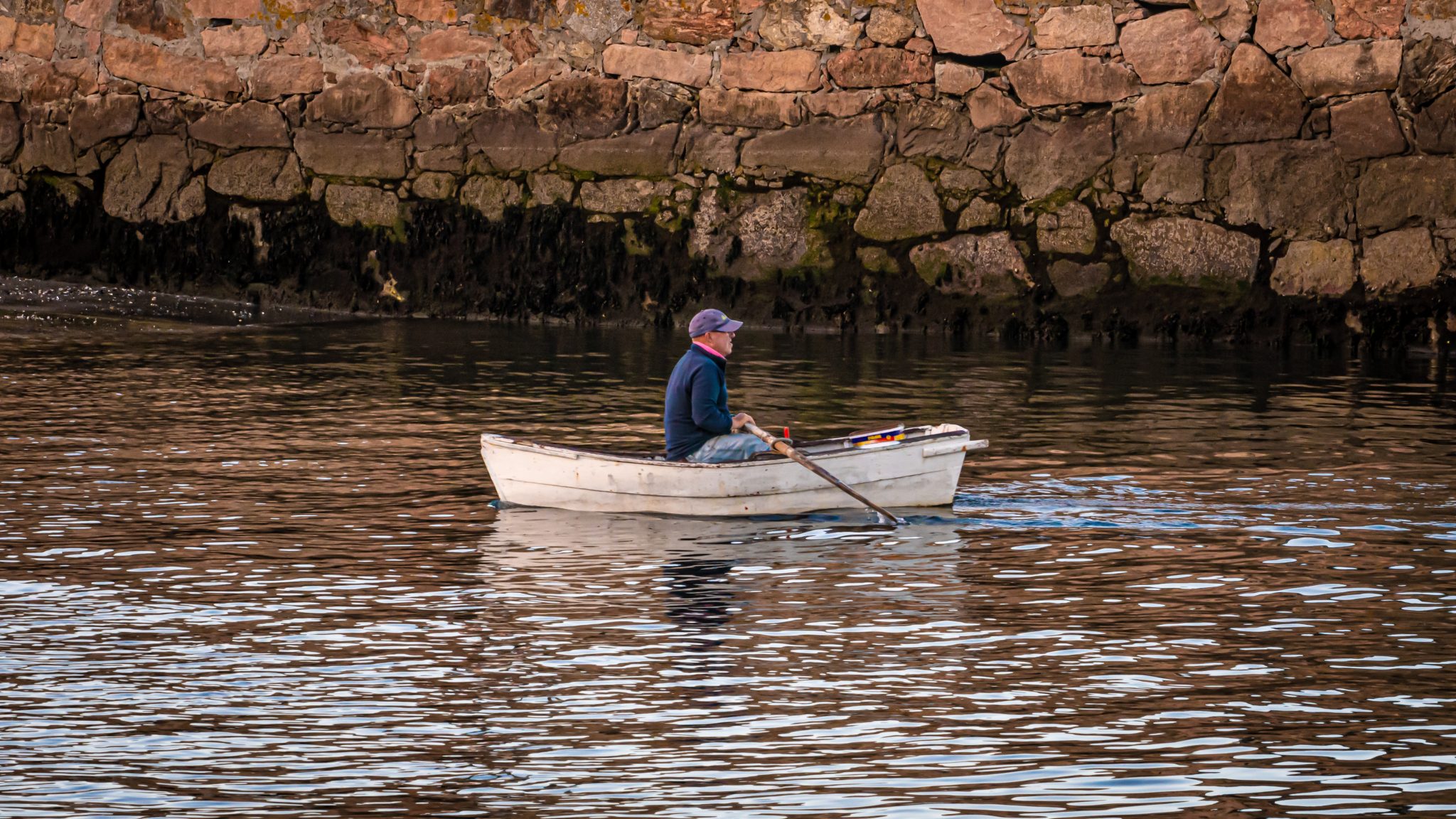 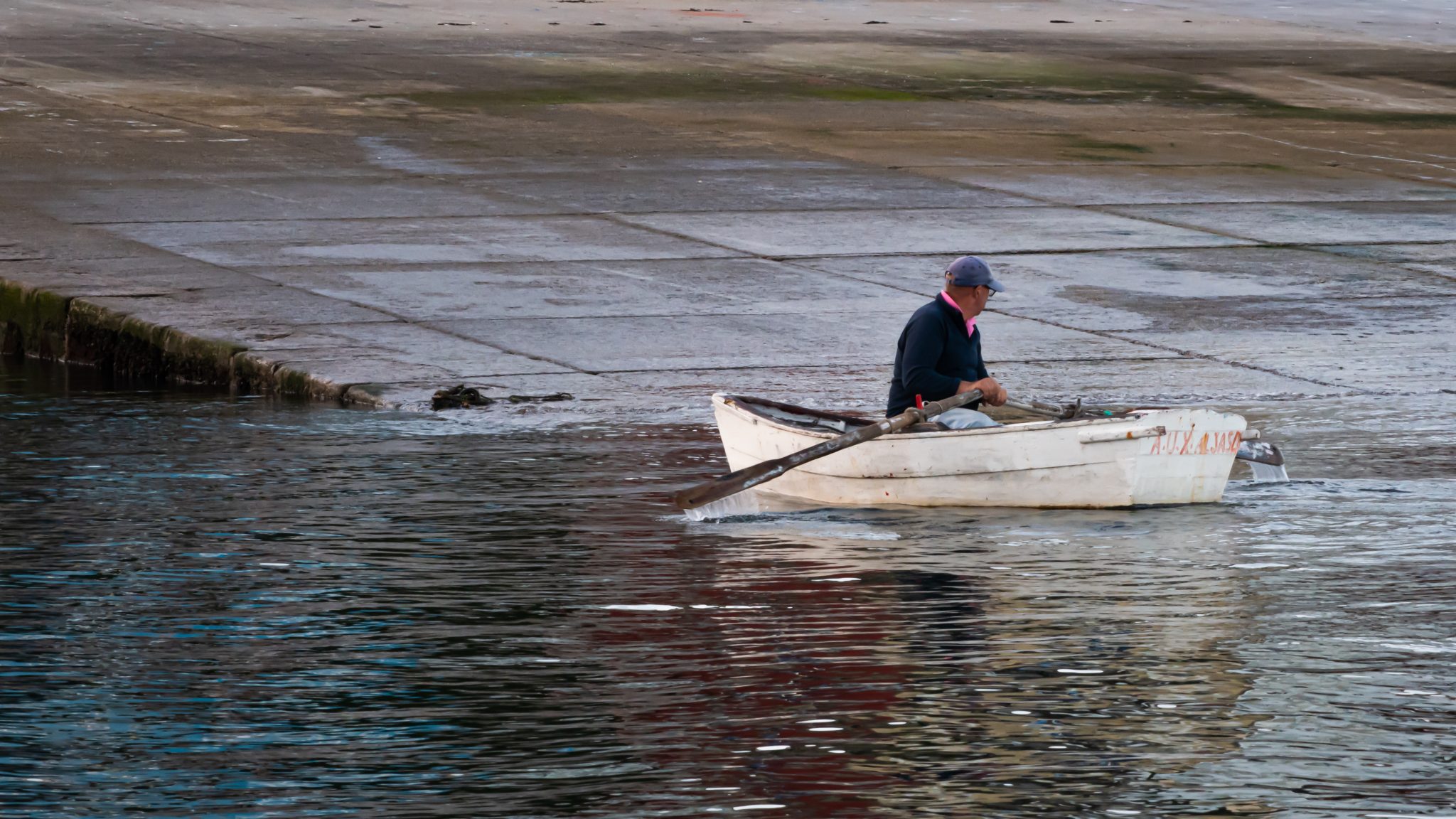 Surprisingly, Patty didn’t find any Camino dos Faros souvenirs on sale in Fisterra (She did find some online for sale in Malpica.).  In fact (and this was the case in Santiago de Compostela as well), many of the locals didn’t even seem to know that the Camino dos Faros existed.

It was a quick taxi ride out to Finisterre.  Here are some of the photos that we took in the fading light. 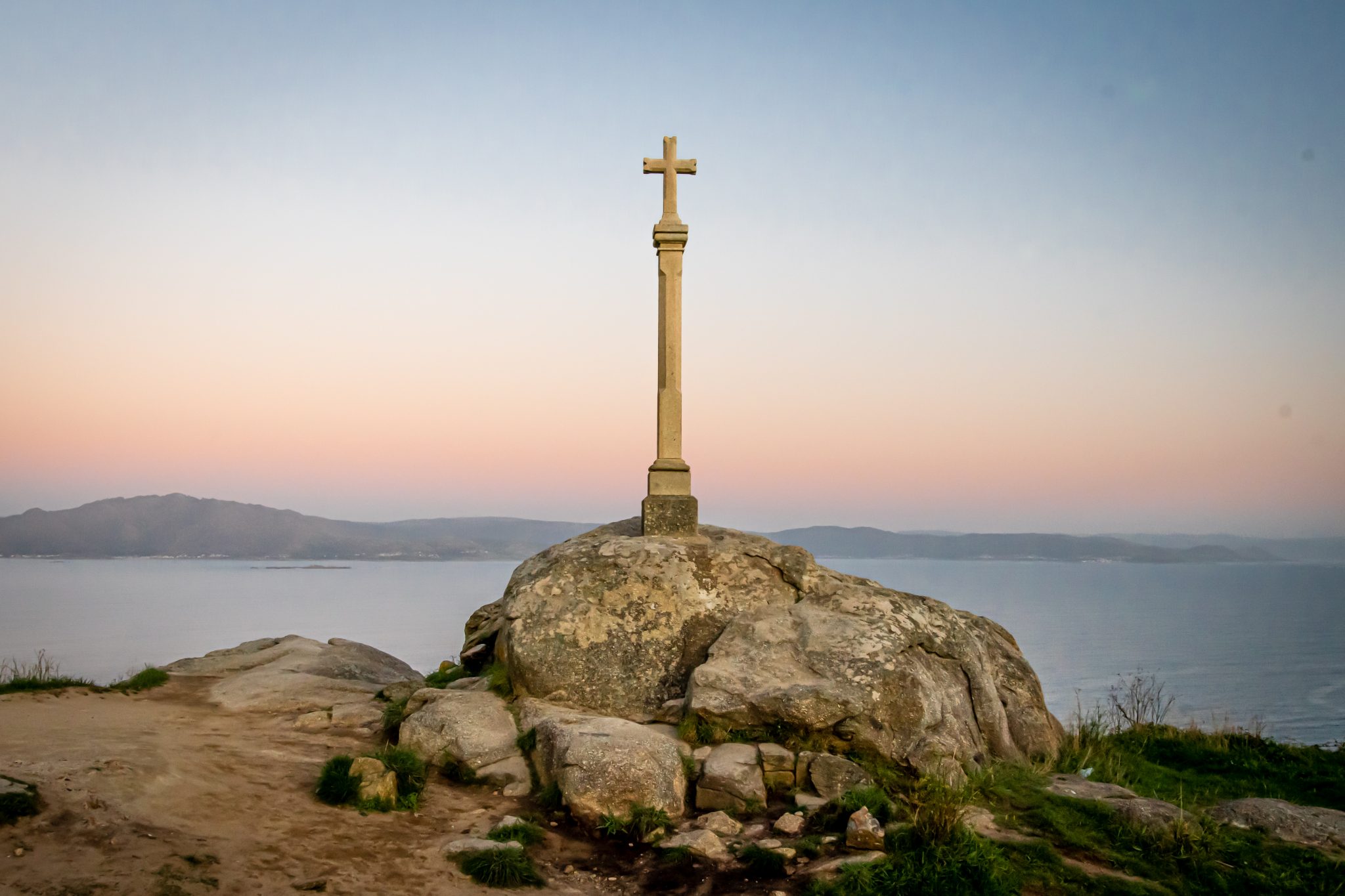 Crucifix at Finisterre. Monte do Pindo is to the left on the far shore. 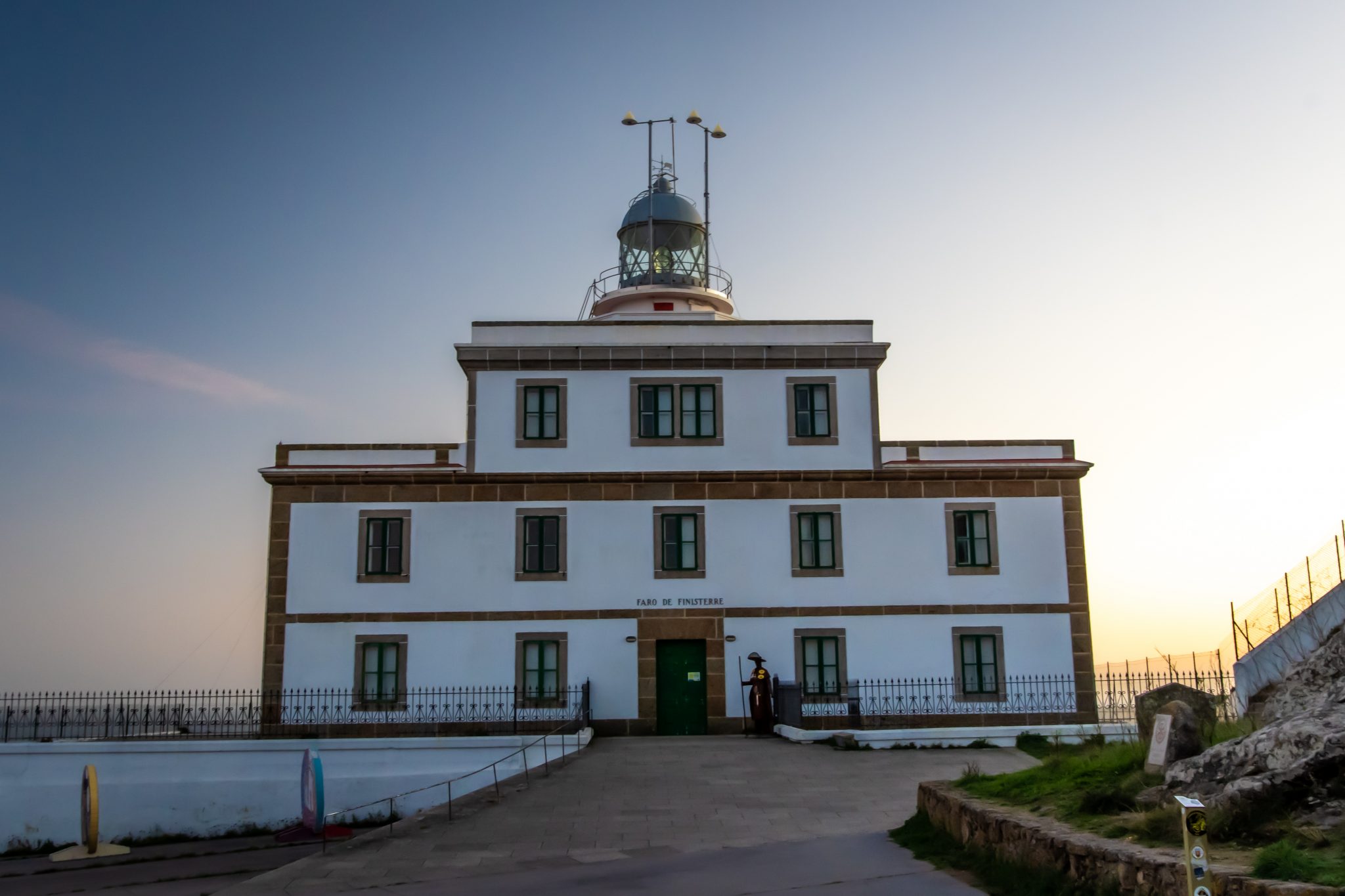 The lighthouse at Finisterre, as seen from Miradoiro de Solpor.

The lighthouse at Finisterre, from the path up to Miradoiro de Solpor. 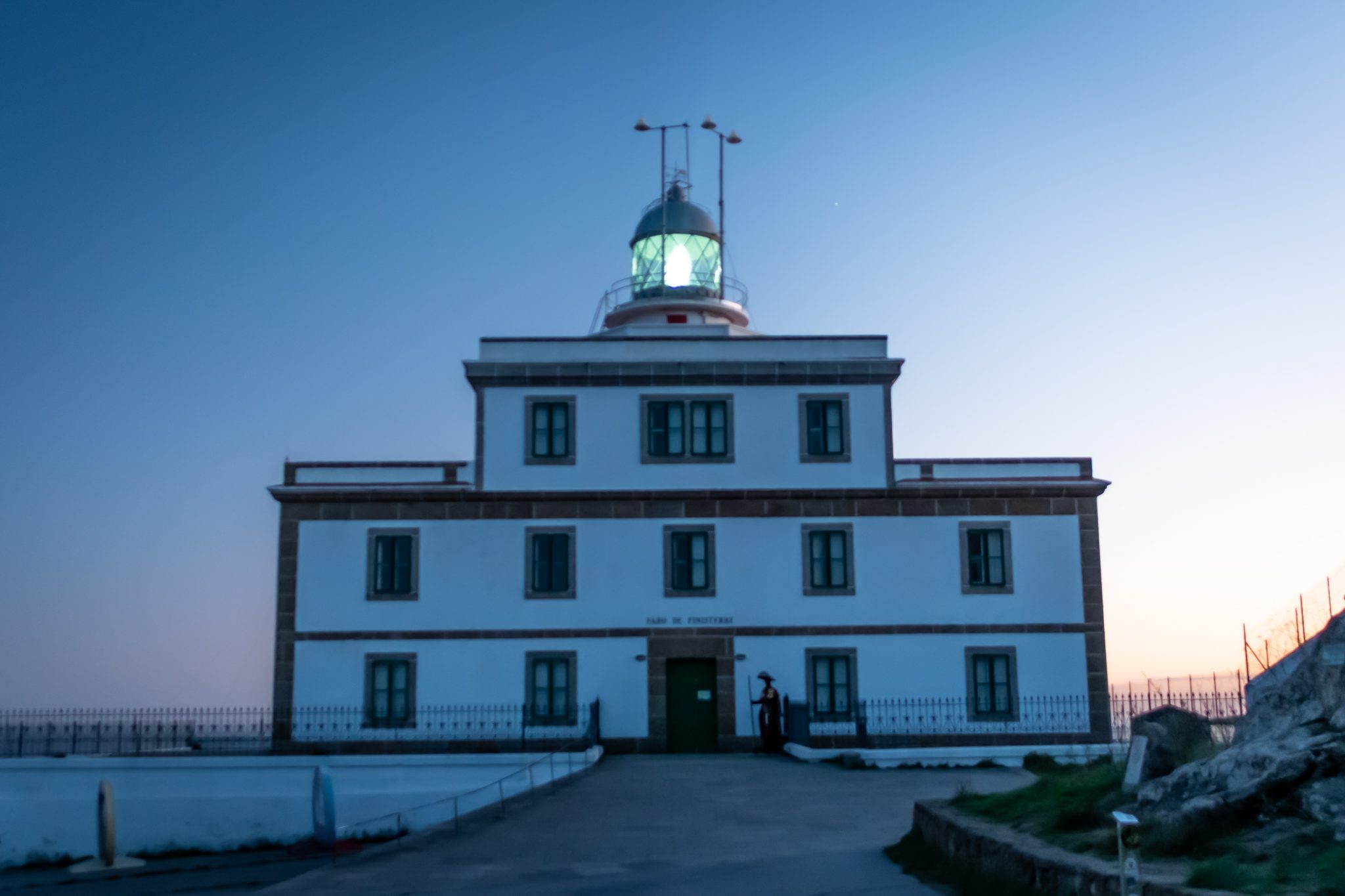 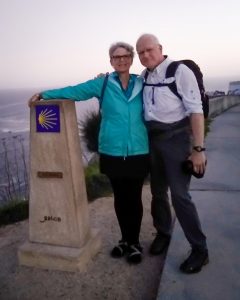 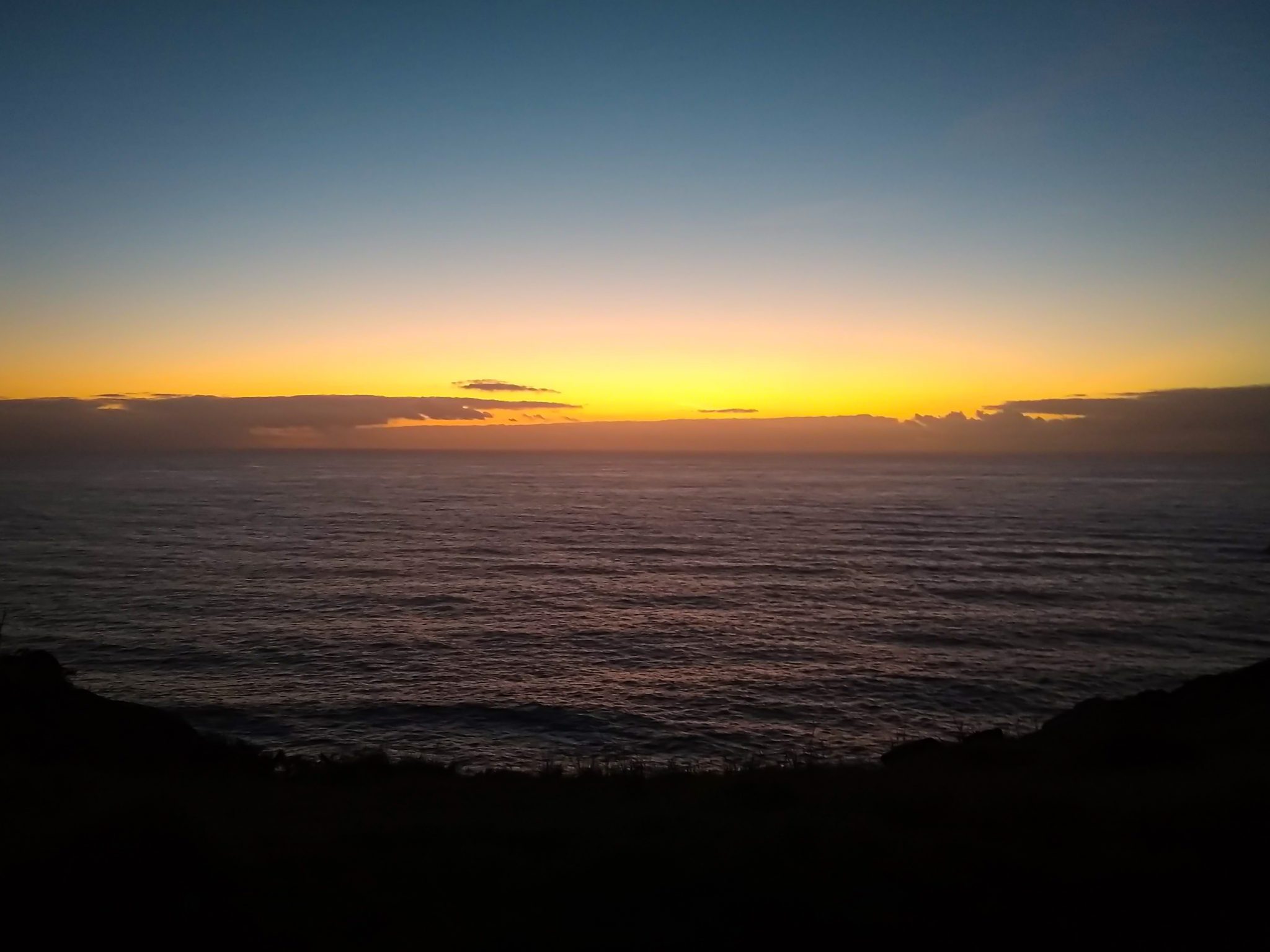 At dark, we returned to Fisterra by taxi, and then we walked to a cafe on the harbor for a late night vino and some cheesecake on the patio.  Afterwards, we hiked back up the hill to Hotel Rustica Spa Finisterrae and we went to bed.  This was the last day of our hiking adventure.  We would spend one more day in Spain, as tourists.