For those not familiar with Quad Rugby, it is played by co-ed teams of 4 players each, manually propelling specialized (and reinforced) wheelchairs on a basketball-sized court.  They score points when they succeed in carrying the equivalent of a volleyball through a goal at the opponent’s end of the court (see www.iwrf.com).  The game is very physical, with plenty of blocking, passing, sprinting, and occasional topples.  The teams in this tournament came from Maryland, Washington D.C, Northern Virginia, Pennsylvania, and Ohio (A team from North Carolina had to cancel due to snow.).  Despite the fact that these teams were not from the same area, many of the opponents appeared to know each other well.  This is obviously a very close-knit and mutually-supportive community.

Over the 2 days, and 11 games that I shot, I took over 3,800 photos, the vast majority using a Nikon cropped-sensor D500 DSLR.  After screening and processing, I delivered over 500 photos to the team points of contact by disk and secure download. The vast majority of the photos were action shots, but I also took some individual portraits, team photos, and a few detail shots.   A gallery of some of the better shots can be found here.

1.  I May Be Getting Better Shots with the 105mm Prime

Although I had been using a NIKKOR 70-200mm, f/2.8 telephoto lens for all of my sports work, I’ve always felt that I needed a larger aperture to get more light to the sensor under low-light conditions.  So, since I had gotten a NIKKOR 105mm, f/1.4 prime lens around Christmas, I wanted to give it a try during this tournament.  It was definitely a compromise in regards to getting close-ups of the action, but I liked both the fact that I could work at a lower ISO (less noise), and the smaller available depth of field gave me a little more blurring of the backgrounds.  To me, the lower ISO in particular made it worthwhile. 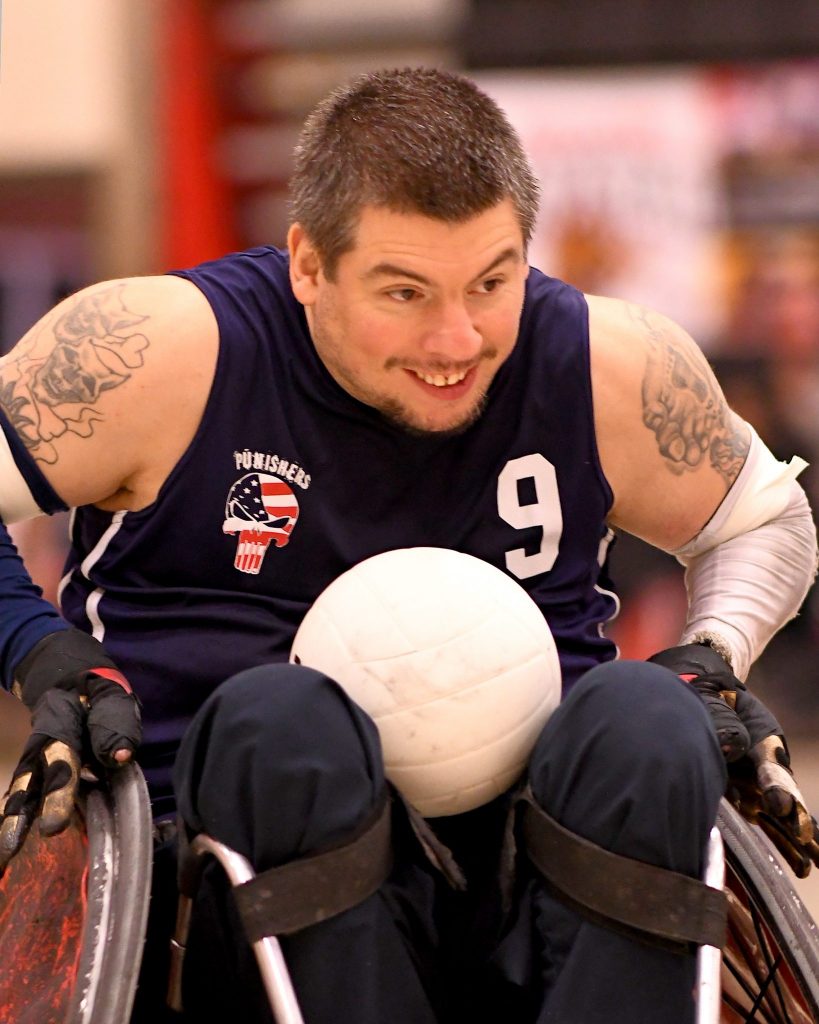 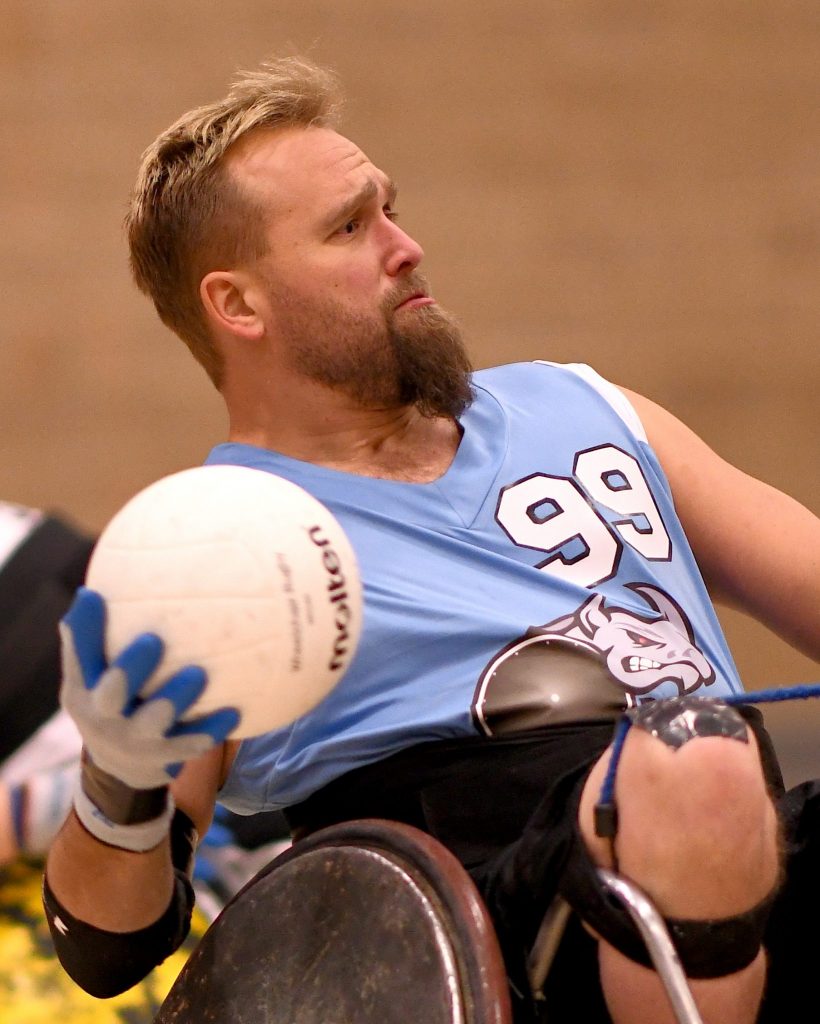 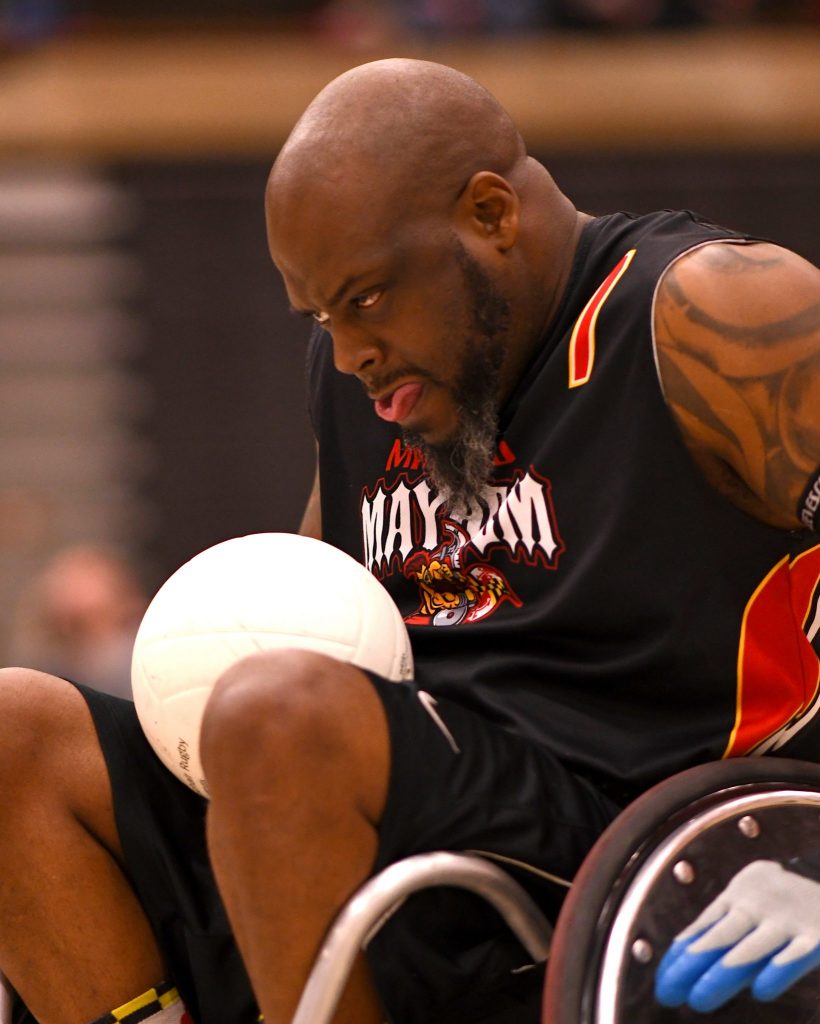 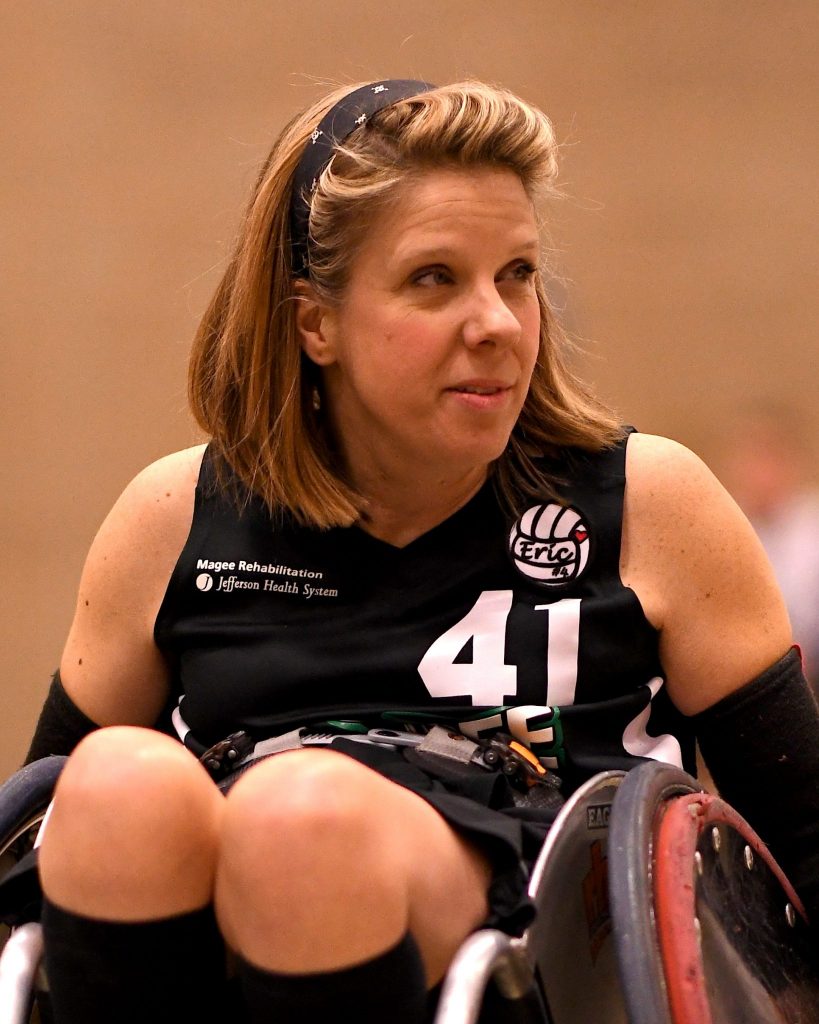 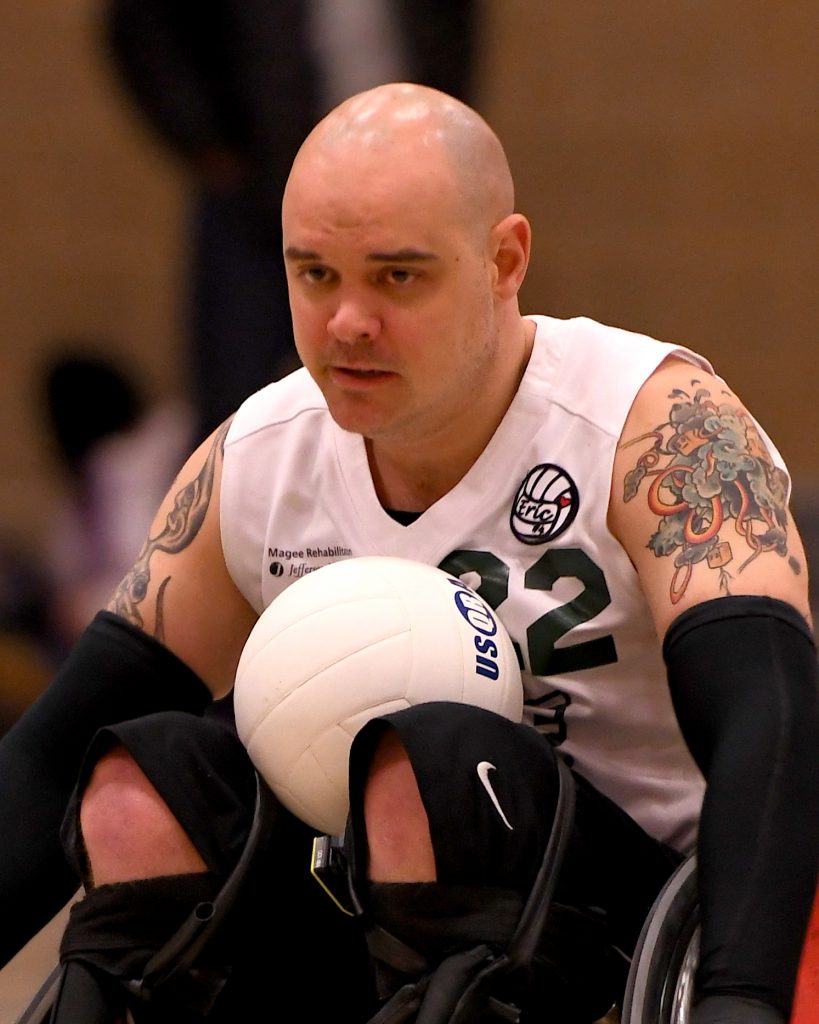 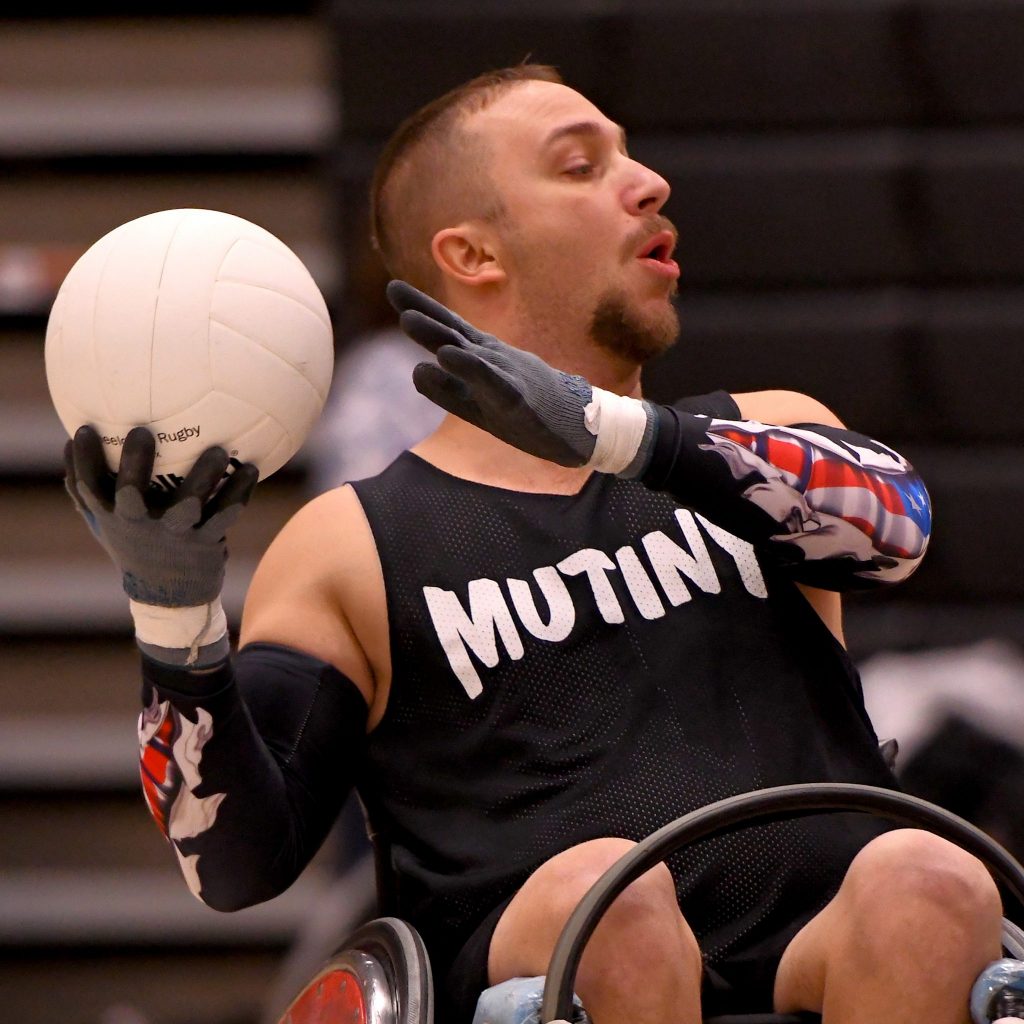 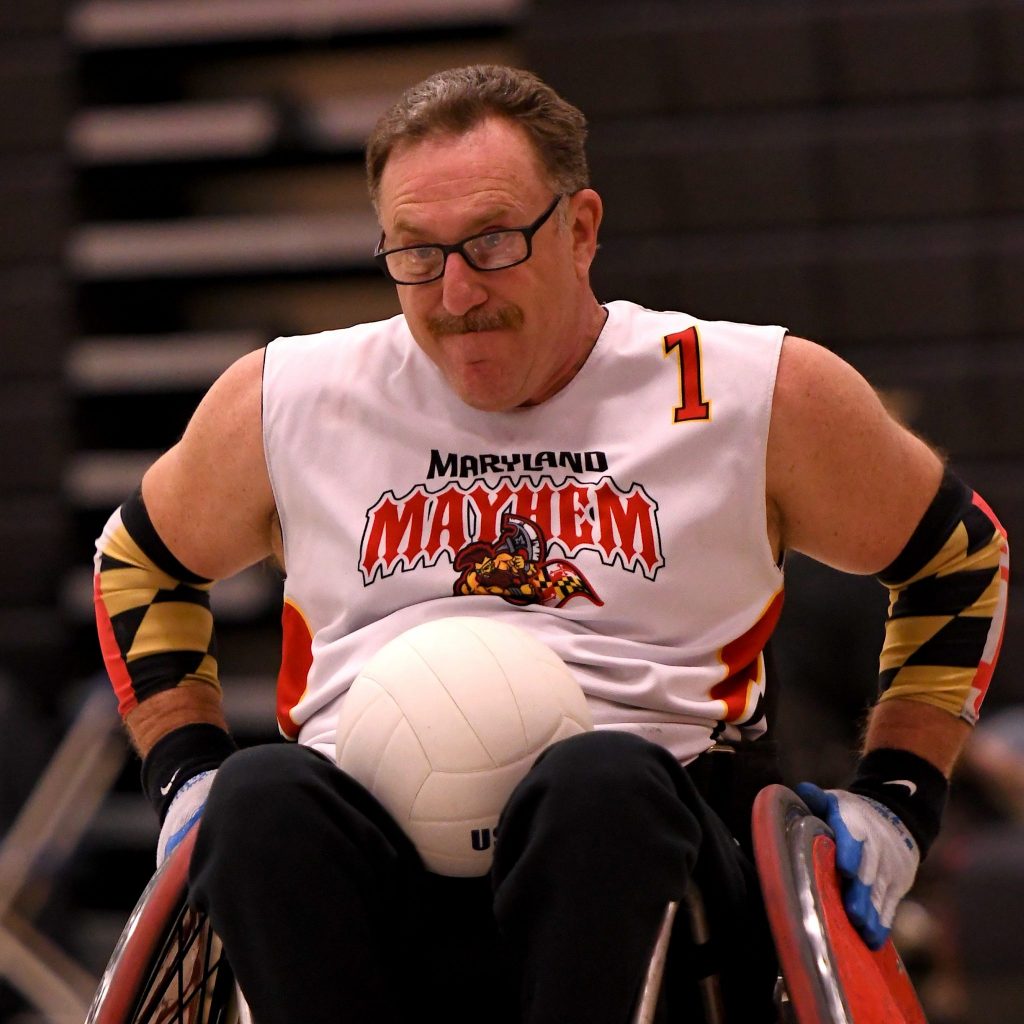 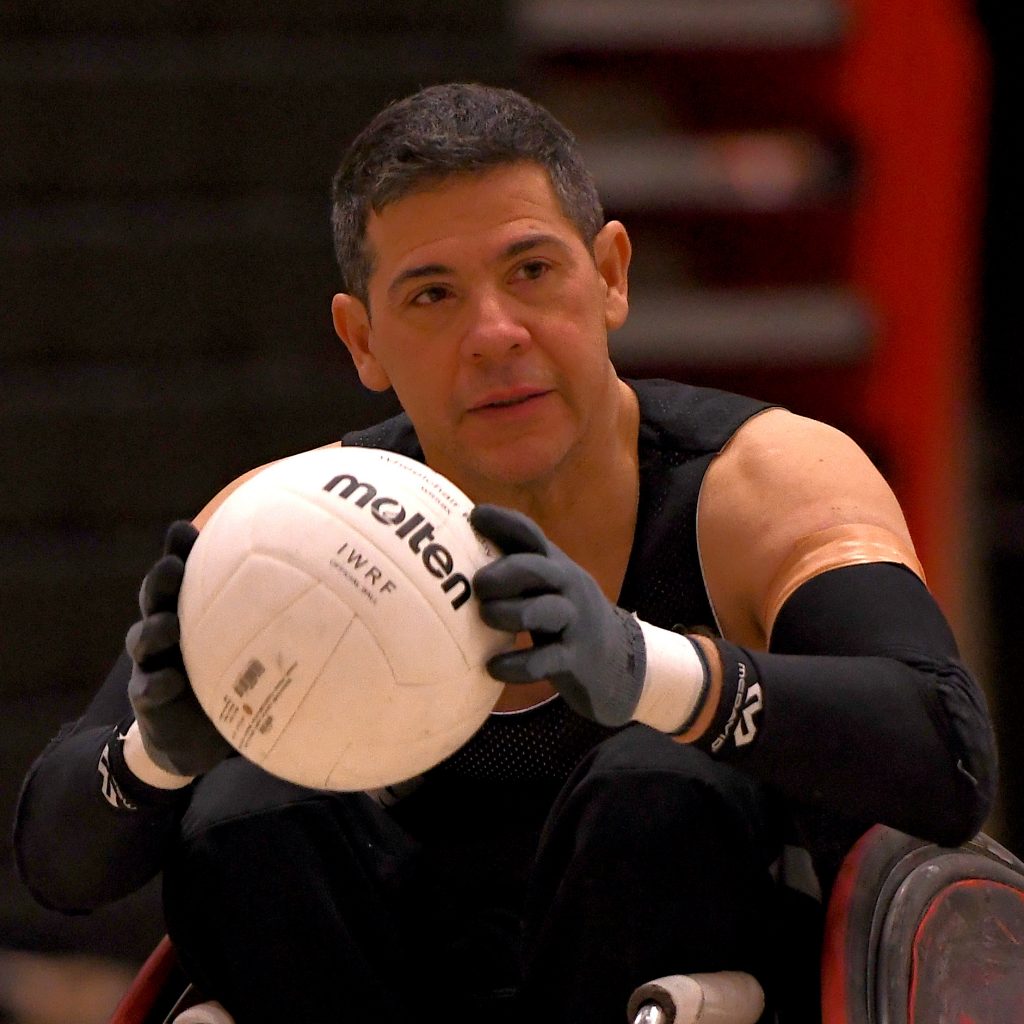 At one point during the tournament, a player asked me if I would take a portrait of him.  At the time, the best lenses I had for portraiture were my 70-200mm, f/2.8 telephoto lens, and a 105mm, f/1.4 prime lens.  Although I had taken some portrait photos using the 105mm lens, the focal length forced me to be a full 30 feet away from my 54inch wide backdrop when the camera was turned to a portrait orientation.  So for these shots, since I was already using the 70-200mm lens for action shots, I would also use it for the portraits.

Unfortunately, when I started taking shots of this player, the lens wouldn’t seem to focus.  I tried multiple times, initially thinking that I just hadn’t set the focus point in the right place on the frame, but it still wouldn’t focus.  So, after several attempts, I told the subject that I was going to go grab another lens.  I did so, and I ended up using the 105mm prime lens for his shots, and they seemed to work out.

Later, when I was back taking action shots of the games, I started asking myself why that lens, which I had just been using, would stop focusing.  Then I remembered that on the side of the lens there is a switch that selects either manual or automatic focusing.  I went over to my gear bag and checked it, and sure enough, it appeared that I had inadvertently knocked the switch to the Manual focus setting.

This is exactly the reason why I need to get out and practice shooting at events such as this.  It puts me in situations where I can make mistakes and learn from them.  These lessons will prepare me to deal with most anything that comes my way some time in the future, when I hope to be doing photography as a business.

As an aside, this taught me that I need to start using manual focus more often anyway, just to get used to it.  For portrait shots, that is what I should default to, but if that is the case, I will also have to make sure that there is enough continuous light on the subject to let me focus reliabily.

3.  Player Portraits are More Impressive Zoomed In, and with a Ball

These were the first individual portraits I had ever taken.  In composing them, I started with the assumption that I should show the player and the entire wheelchair.  But, although the colorful and beat-up wheelchair is impressive, that is not the main subject of the photos.  So, I wanted to zoom in more on the subject.  But when you only provide a hint of the wheelchair, you lose some context for the photo.  So, I found that asking the player to hold a rugby ball restored that context in a way that still allowed me to zoom in and get what I considered to be a more powerful photo of the subject’s face. 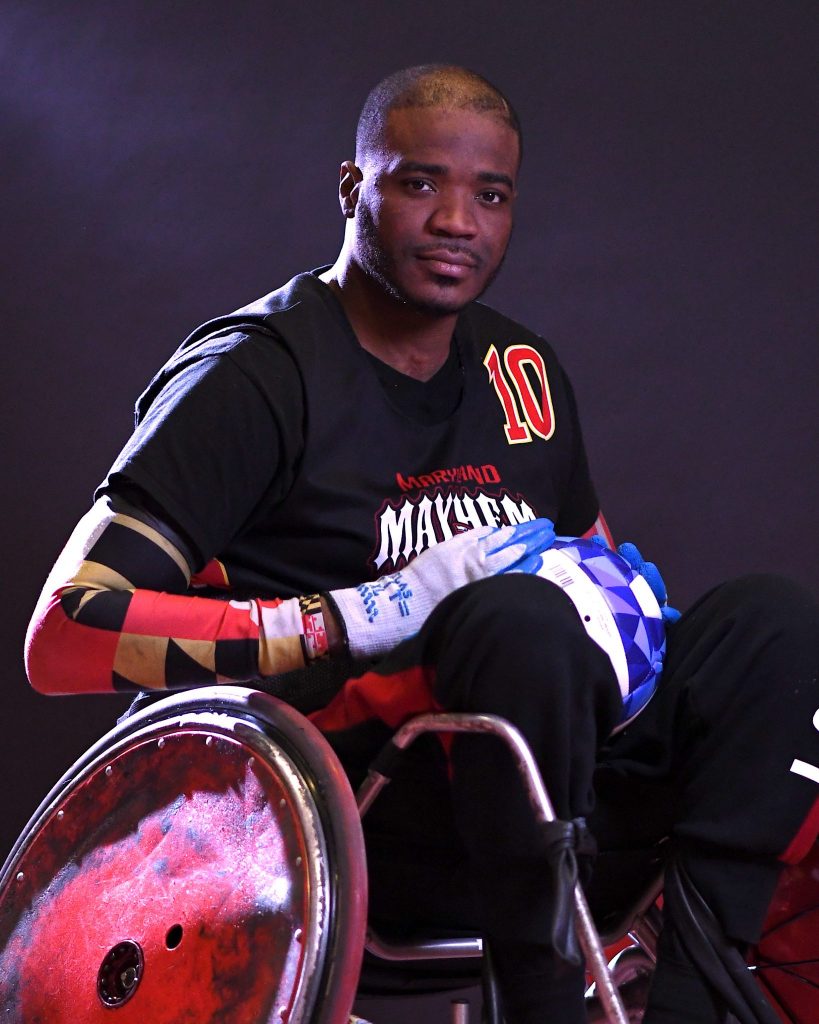 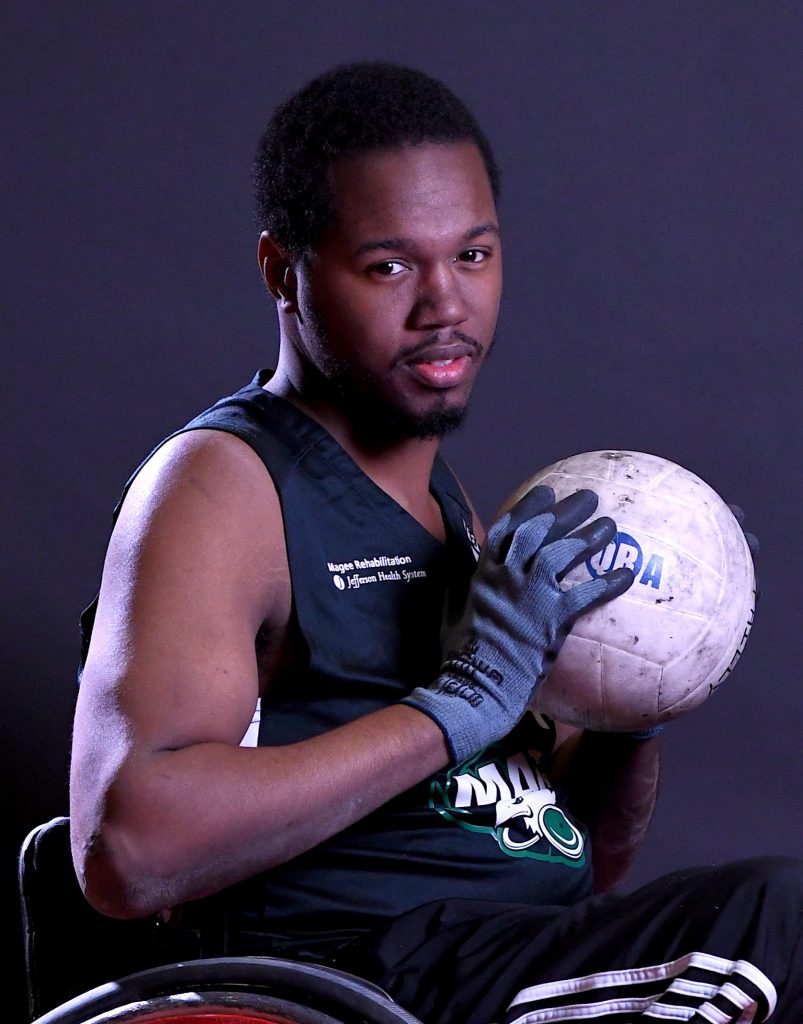 4.  Photos Need to be Cropped & Bordered Specifically for Framing

In order for my photos to serve as inspiration, they need to be seen, and not just seen as computer wallpaper or photos on a Facebook page.  They need to be printed, framed, and hung on a wall some place where they can’t be missed.  But in order to deserve this, they must be very good photos, the print quality has to be good, the frame and framing have to be high quality, and it all has to be done at a reasonable price.  So, figuring all this out was my next challenge.

First I spent some time at the local Michael’s store, where I found some nice looking, but inexpensive 11×14″ and 8×10″ standard frames, and nice pre-cut mats to make them work with 8×10″ and 5×7″ prints respectively.  I found that the double-layer mats were much more impressive than the single-layer ones, and black worked well, since I would probably be using dark backgrounds for most portrait work.

Then, I started researching the best ways to get photo enlargements printed.  Although I could see myself buying a specialized photo printer in the not-to-distant future, I settled on Walgreens online photo printing as my best shot.  As it turns out, their user interface for ordering prints was a little clumsy, but the prints were decent, at least up to 8×10″.

It appears that most standard pre-cut photo mats are designed to cover 1/4″ of the edge of the photo.  This presents a problem for me, because I typically crop for online display, and I don’t want to reserve extra space on the edge, just in case the photos are framed.  In any case, I found that the final result looked much more impressive if I cropped the photos to non-standard dimensions that would allow me to add a 3/8″ white border that would get the photo back to a standard size.  I think the exposed 1/8″ of white border makes the framed photo look more impressive.

5.  Framing is Tedious, But the Result is Impressive

The framing itself was a little tricky, since you have to position and secure the photo to the back of the mat, by seeing if the photo is centered on the front of the mat.  I actually tried printing the photos with larger borders, so that the photos were the same dimensions as the outer dimensions of the mat (so that the photo would automatically be centered), but I found that the paper stock used by Walgreens is not cut to the exact standard dimensions.  I ended up trimming the photos anyway.  In any case, I was happy with the results, and so were the players I gave these to. 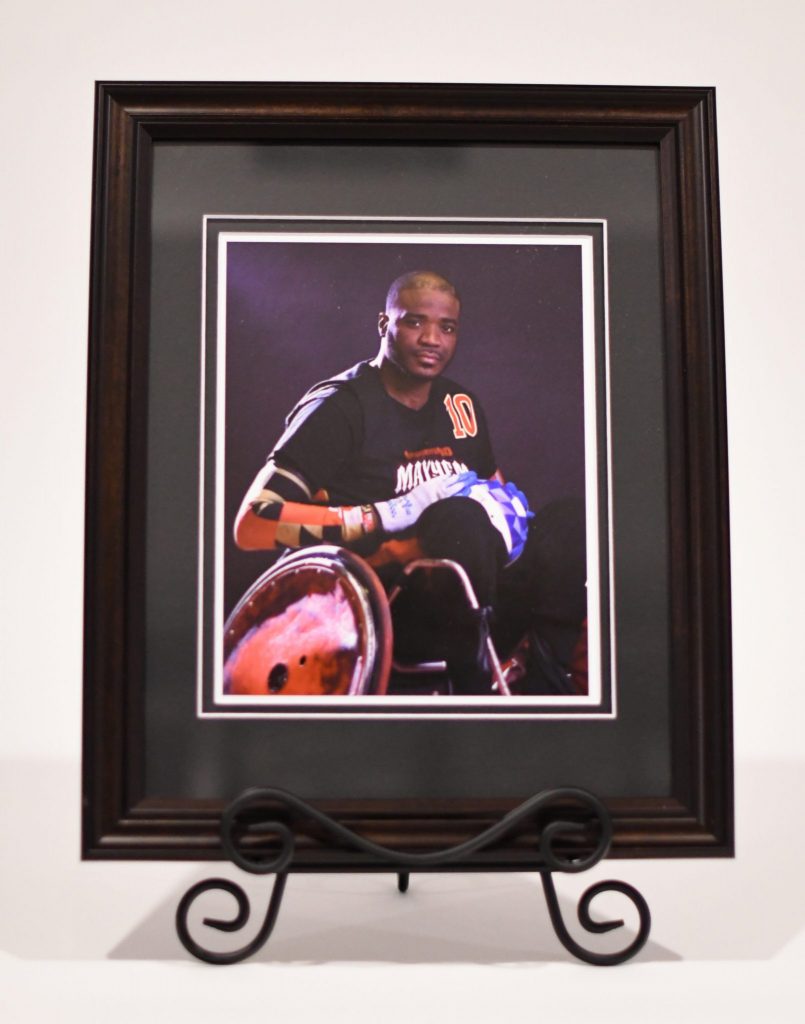 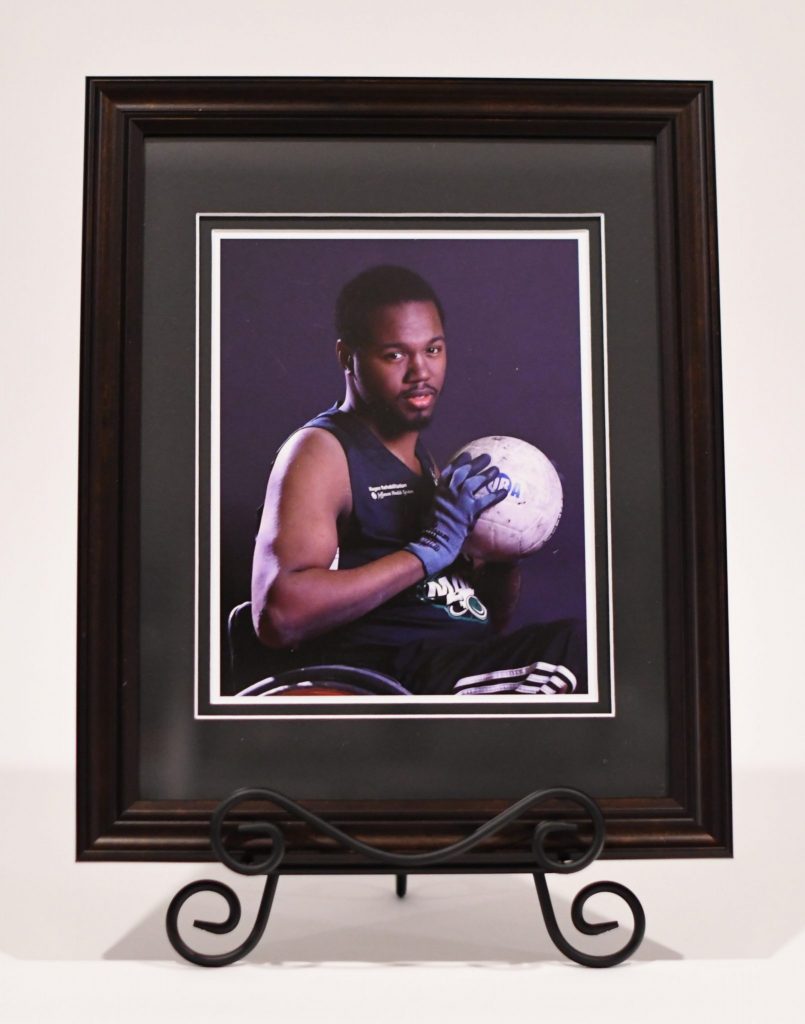 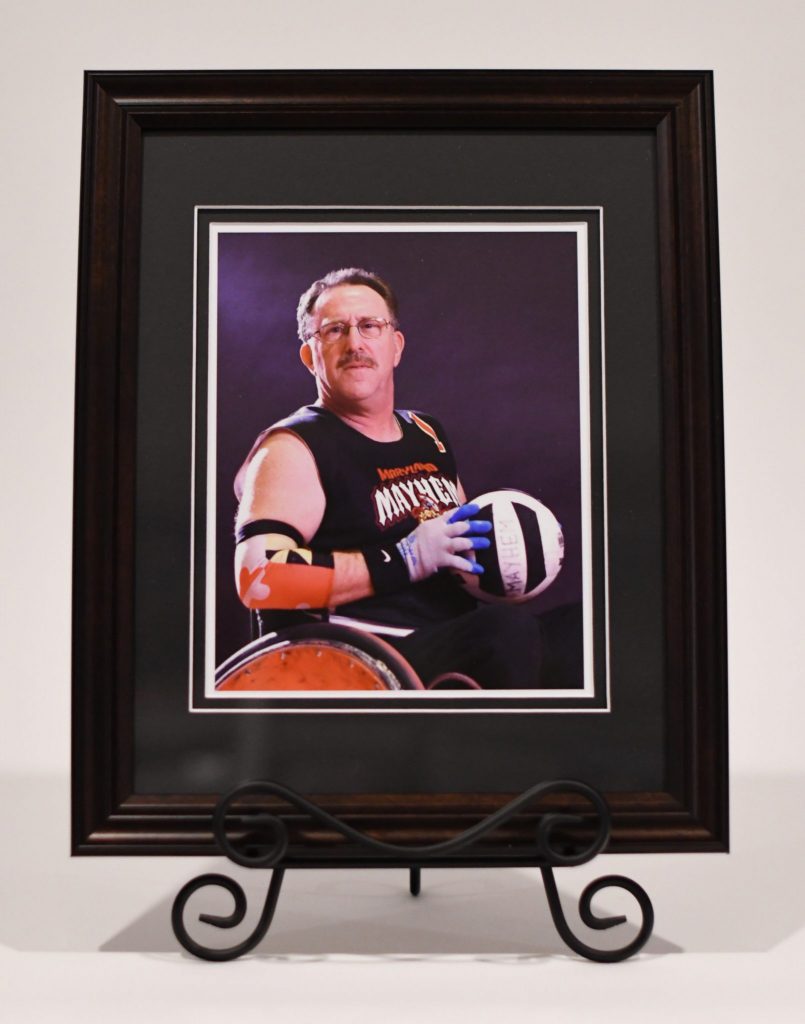 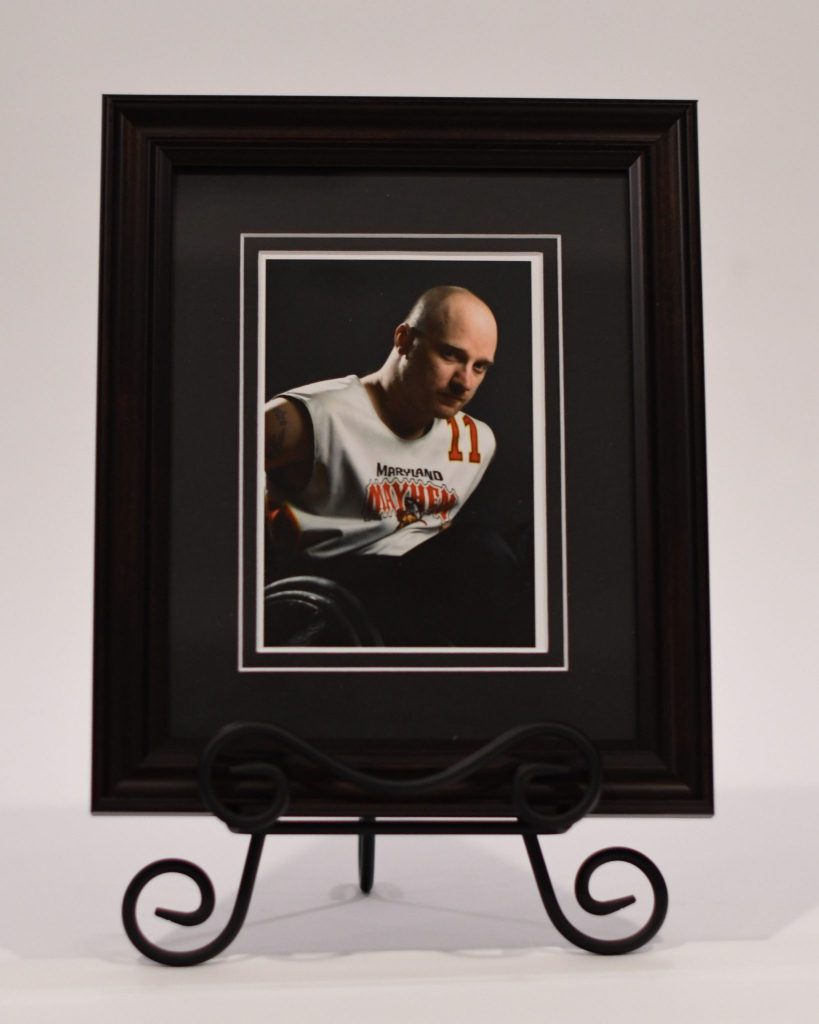 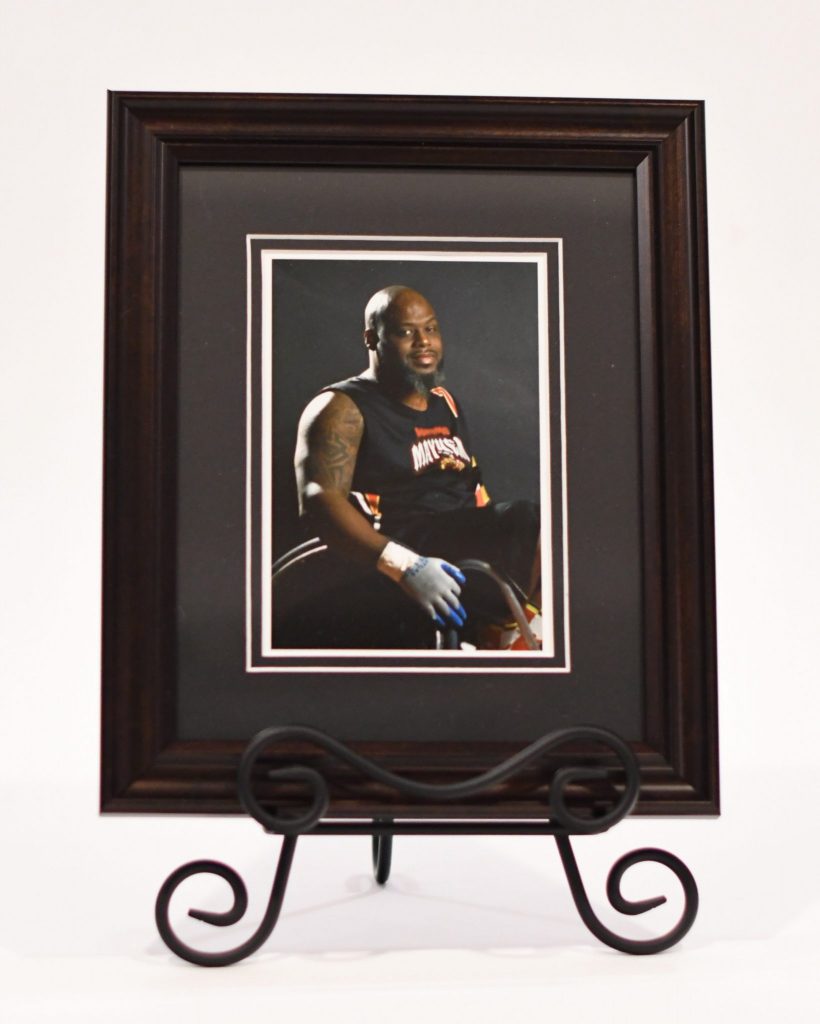 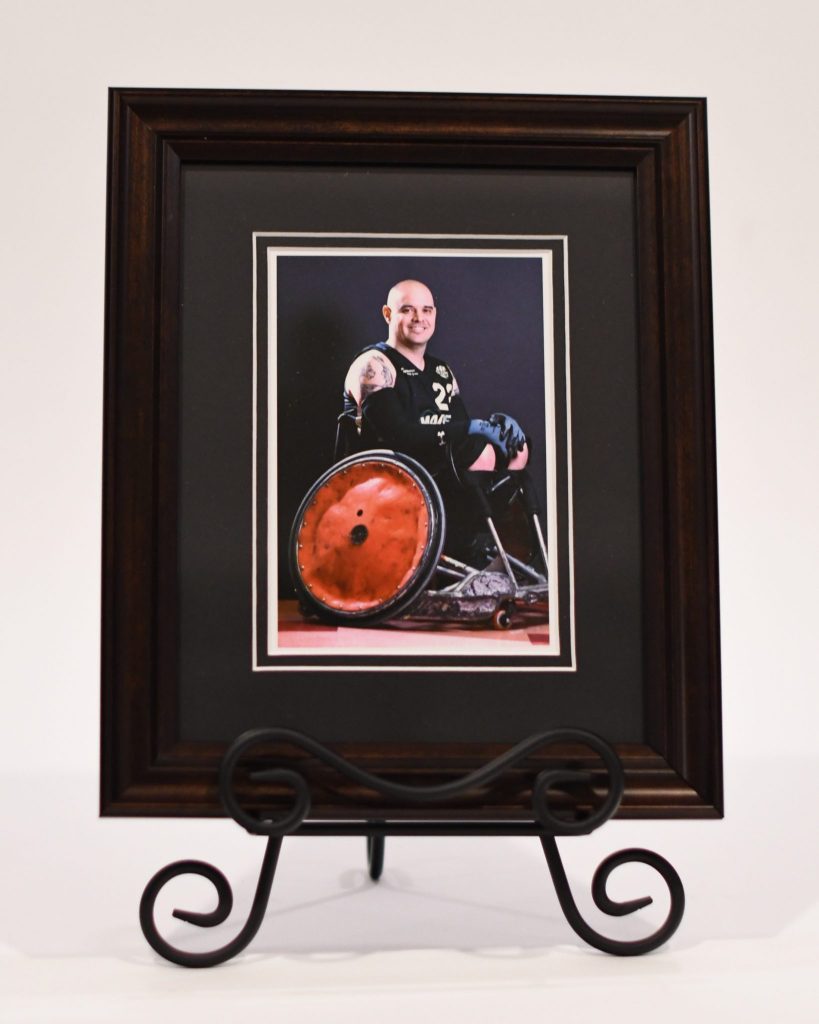