The Tyndrum Inn restaurant provided a very nice breakfast to start our day.  From there, we started north along an old military road

The next two photos were taken just to the west of the Auch Estate, looking west, up Glen Allt Kinglass.  We would be coming back this way, going south, by train TBD days later,  crossing the train bridge that you see in the distance.

We had lunch at the Bridge of Orchy Hotel, where we ran into Bobby, and Jim and Joan once again.

After lunch, Bo and Peggy caught a taxi to our B&B in Glencoe/Ballachulish, while Patty and I started hiking (in the rain) the 3 additional miles to the village of Inveroran, and the Inveroran Hotel.  This hike was straight up, just over 600 ft to about 1,100 ft elevation over 1.75 miles, and then straight down to about 600 ft elevation in about 1.25 miles.  Although windy, the weather cleared, and to me, it was the most spectacular part of the trip.

Inveroran Hotel.  Patty is fourth from the left.  Then there is Cindy (in the white hat), Joan and Jim (from Glasgow, seated), and Bobby (from Wheaton, MD, seated).

From the Inveroran Hotel, we called for a taxi to take us to Glencoe.  Our taxi driver, Raymond, was just completing a run in Glencoe.  As it turns out, his fares were … Bo and Peggy.  Over the next couple of days, whenever we needed to go somewhere, Raymond always seemed to be available.

The photos below were taken along the road from Inveroran through Glen Coe to the village of Glencoe.

That night, after checking in at Ardno House, we walked about a mile along Loch Linnhe to the Holly Tree Hotel, where we had a lovely dinner, with a lovely view. 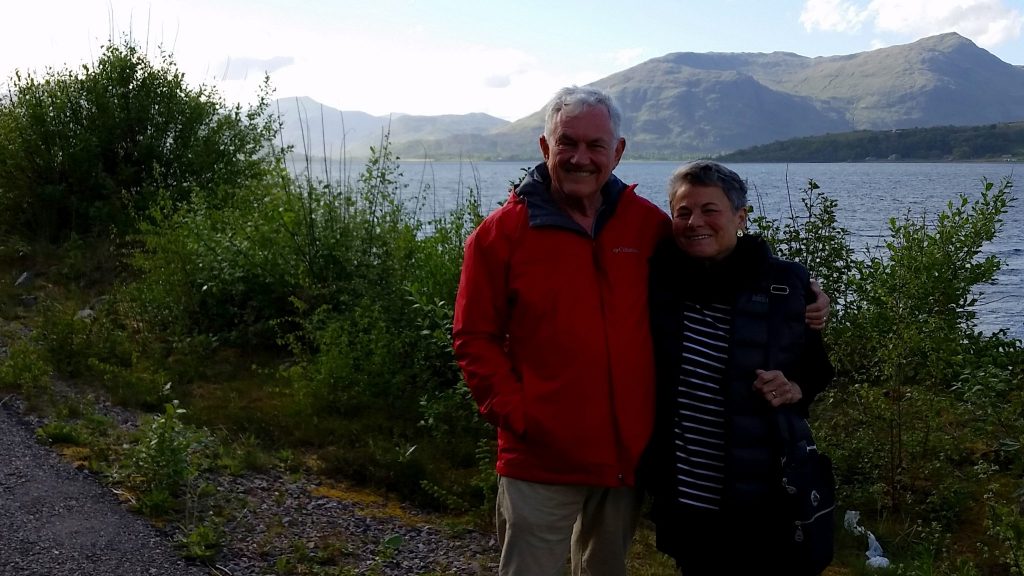 It was just another beautiful day in Scotland.