2019 Camino Day 6 – O Pedrouzo to Santiago de Compostela, Spain, and on to A Coruña

On the morning of Friday, October 4th, we started hiking before daybreak west from O Pedrouzo to our ultimate destination at Santiago de Compostela.

We stopped at O Amenal.

At TBD we ran into Arnel and Ginny Rivera, and we walked with them for a while.

Soon we were rolling toward Santiago.

We stopped at San Paio.

We stopped at TBD.

We moved on to Monte de Gozo.

We walked to the Cathedral.

While waiting for the group to come in, I ran into Nancy from Washington State.

Once the group arrived, there were hugs for all.

Then we ran into Renee from California.

We ran into the ladies from Canada.

Patty ran into a chum.

Then we ran into Neil and Vanessa from Australia.

Then Patty, Mary and I went to find dinner and a place for Mary to stay. While we were eating outside at Dakar, first David from Canada stopped by and chatted, then Glenn and Louisa from England stopped by. Then two of the four sisters from Scotland stopped by.  Then a woman that stopped by the albergue in Ponferrada walked by. 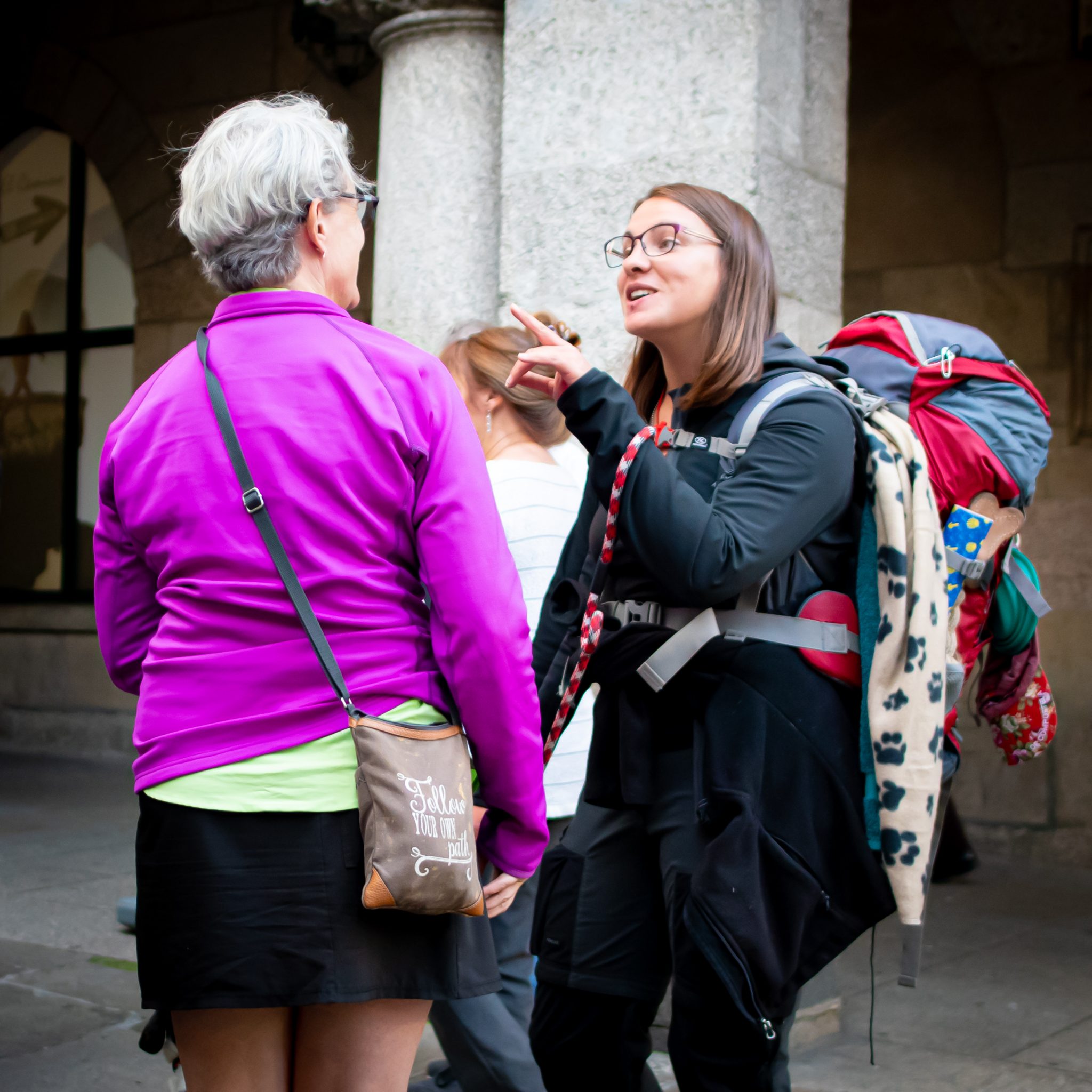 We were in a city of TBD, but it felt like we were on a cruise ship.

Patty and I had to get to the train station to catch our train to A Coruna.

On October 6, 2019, Patty and I walked from O Pedrouzo to Santiago de Compostela with Mary and the I’ll Push You gang.

Later, Patty and I picked up our suitcase from Mary’s hotel, walked to the Santiago de Compostela train station, and caught the TBD train to A Coruna, Spain.

It was about TBD when our train arrived at the A Coruna station.  This would just give us enough time to check in at the Plaza Hotel, and go out and explore A Coruna using the last rays of sunlight.

The first place that I really wanted to visit in A Coruna was the archaeological site of Castro de Elvina, a 4 hectare hill fort overlooking A Coruna that was built by the Celts in the third century BC, and was inhabited continuously for the next 700 years!  The Celts had migrated from the center of the European continent and reached the northwest corner of the peninsula around 600 BC (Iron Age).  They established a culture that featured the construction of hill forts which the Romans would later call “castros” (from the Latin castrum “castle”), of which there were at one time hundreds spread across the Iberian peninsula.

In 237 BC, around the time of Castro de Elvina’s construction, the Carthaginians were invading the Celtic Iberian peninsula from North Africa, so there was a need for Celtic tribes to build more centralized settlements, and adopt more hierarchical leadership structures that would be more effective in repelling attacks.

In 227 BC, the Carthaginians, in their continued incursion north into the Iberian peninsula, established for themselves the city of Cathargo Nova (New Carthage) on the Mediterranean coast as their capital city in Iberia (This city is now called Carthegena.).  With this conquest they acquired for themselves the area’s vast rich deposits of silver.

In response, in 226 BC the Roman Empire established an alliance with the Iberian city of Seguntum (now called Segunto), just 250 km to the north.  In 219 BC, the Carthaginian leader, Hannibal, attacked and laid siege to Seguntum.  In the Spring of 218 BC, the Roman Senate responded by declaring the Iberian Peninsula to be a Roman province (which they called Hispania), and then declaring war on the Carthaginians.  This conflict, which would last for the next 17 years, would later be called the Second Punic War, and it would be regarded by ancient historians as the greatest war in the history of the world.   It saw Hannibal march his troops through Iberia and over the Pyrennes and then the Alps to invade the Italian peninsula.

In 218 BC, Rome finally defeated Hannibal, and began a 600-year Roman occupation of the Iberian Peninsula, but it took until 19 BC, when the Roman emperor Augustus (r. 27 BC – AD 14) finally completed the conquest.  During this period, A Coruna rose to be an important city whose nucleus was its port, and Castro de Elvina was abandoned.

This a fascinating history.  But unfortunately for us, Castro de Elvina is still an active archaeological dig site, and so it wasn’t open to the public on a Friday evening.  As it turns out, free tours of the site are available, but only on Sunday afternoons.

So, instead of Castro de Elvina, that evening we took a taxi down to the port of A Coruna.  This area was important to indigenous Iberians long before the Romans or even the Celts arrived.

Torre de Hercules (The Tower of Hercules), which is a lighthouse that was originally built by the Romans in TBD (They referred to it as Farum Brigantium).

During the second century B.C., the Romans took control of the area and established it as an important maritime port, which at the time was called Brig.  It was so important, that in 62 B.C. it was visited by Julius Caesar himself.